How Billy Graham’s legacy lives on in American life

How Billy Graham's legacy lives on in American life 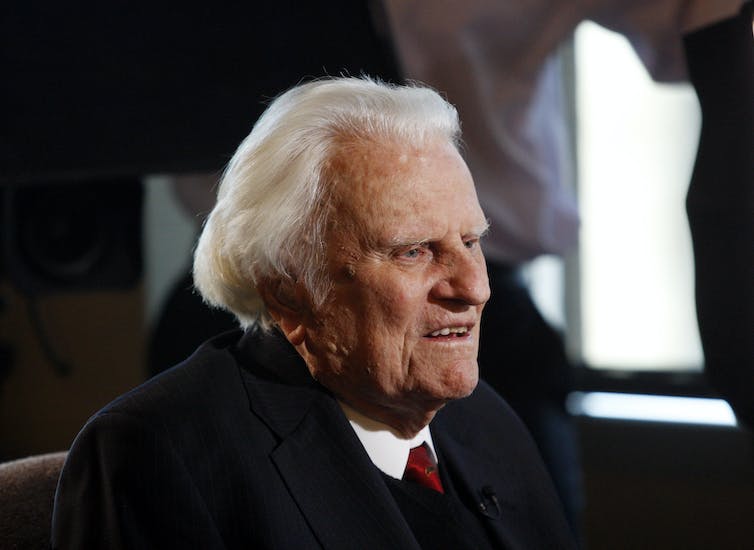 On Feb. 21, Billy Graham, the evangelical Christian minister who was widely regarded as “America’s pastor,” died at the age of 99.

Graham is best known for his global “crusades” – rallies that attracted crowds in the millions – and for the spiritual counsel he provided to American presidents for over a half-century. But, what is less widely known is his contribution to the religious language in American public life. 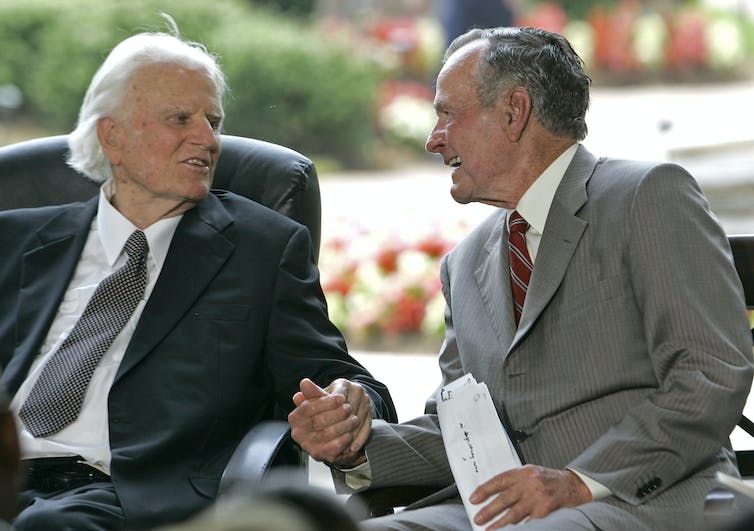 Americans before the mid-20th century were often ambivalent about religious language and images in public life. Graham helped change that reality.

Rhetoric linking the United States with a divine power, which Graham would later embrace, emerged on a large scale with the outbreak of the Civil War in 1861. M.R. Watkinson, a Pennsylvania clergyman, encouraged the placement of “In God We Trust” on coins at the war’s outset in order to help the North’s cause. Such language, Watkinson wrote, would “place us openly under the divine protection.” 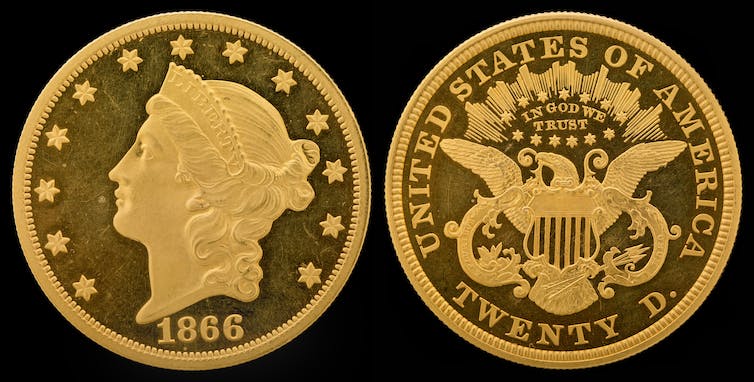 In 1864, with the Civil War still raging, a group supported by the North’s major Protestant denominations began advocating to change the preamble of the Constitution. The proposed language would have declared that Americans recognized “Almighty God as the source of all authority and power in civil government.”

If the amendment’s supporters had succeeded in having their way, Christian belief would be deeply embedded in the United States government.

But, such invocations of God in national politics were not to last. Despite lobbying by major Protestant denominations such as the Methodists, this so-called Sovereignty of God amendment was never ratified.

Though “In God We Trust” was added to coins, it was not added to the increasingly common paper money. In fact, when coins were redesigned late in the 19th century, it disappeared from coins as well.

As I demonstrate in my book, these developments were related to the spread of secularism in the post-Civil War U.S. For many people at the time, placing religious language in the Constitution or on symbols of government was not consistent with American ideals.

In the 1950s, however, religious language found its way into government and politics, due in no small part to Billy Graham.

In 1953, at the strong encouragement of Graham, President Dwight Eisenhower held the first National Prayer Breakfast, an event that brings together political, military and corporate leaders in Washington, D.C., usually on the first Thursday of February. 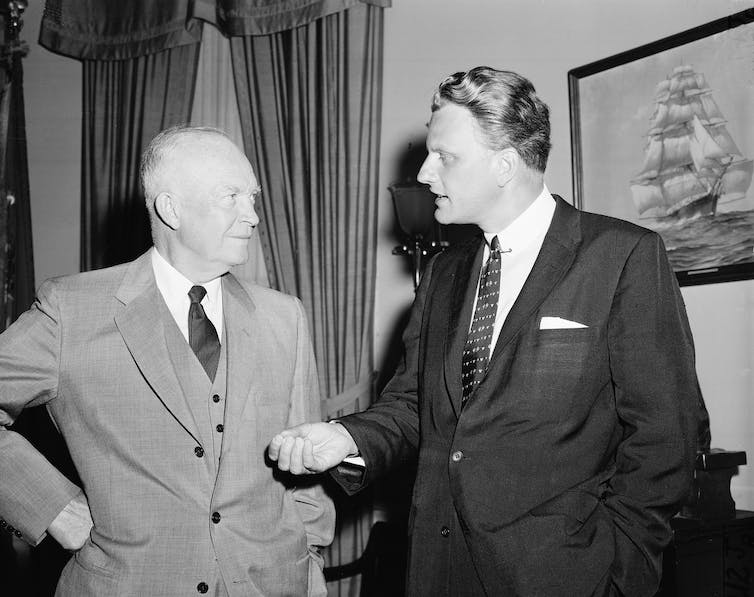 In the following years, Eisenhower signed a bill placing the phrase “In God We Trust” on all American currency and the phrase was adopted as the first official motto of the United States.

Both of these developments reflected the desire to emphasize Americans’ religious commitment in the early years of the Cold War. Historians such as Jonathan Herzog have chronicled how leaders such as Eisenhower and Graham stressed the strong faith of the nation in setting the U.S. apart from the godlessness of Soviet communism. But, there were domestic concerns as well. Princeton University historian Kevin Kruse has shown that religious language was not merely rhetoric against communism.

Indeed, this belief in American religiosity had emerged over several decades. Conservative businessmen had allied with ministers and evangelical leaders such as Billy Graham, to combat the social welfare policies and government expansion that began with Franklin Roosevelt’s New Deal. These wide-ranging programs, designed to tackle the Great Depression, irked many conservatives. They objected to government intervention in business and Roosevelt’s support for labor unions.

To be sure, Billy Graham was not singularly responsible for all of these developments. But as his biographers have noted, he loomed large in the religious politics of the 1950s.

The prevalence of religious language in U.S. politics that Graham helped inspire continues to this day. Indeed, the Trump administration has been particularly swift to employ it. 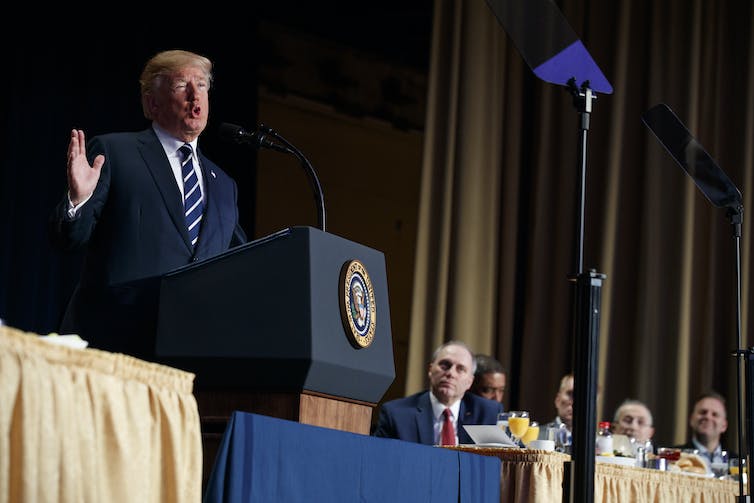 In his address to the National Prayer Breakfast on Feb. 8, President Donald Trump emphasized the centrality of faith in American life. After describing the country as a “nation of believers,” Trump declared that “our rights are not given to us by man” but “come from our Creator.”

These remarks came a week after Trump linked religion with American identity in his first State of the Union address. On Jan. 30, he similarly invoked “In God We Trust” while proclaiming an “American way” in which “faith and family, not government and bureaucracy, are the center of the American life.”

Trump’s language captured the linking of faith and public life that Graham encouraged as he rose to fame nearly 70 years ago.

This is an updated version of an article, originally published on Feb. 2, 2018.

This article was originally published on The Conversation. Read the original article.

5 Inventors Killed by Their Own Inventions

The ‘first scientist’s’ 800-year-old tonic for what ails us: The truth

5 Comedians and their philosophy

For Nietzsche, life’s ultimate question was: ‘Does it dance?’

About Viktor Frankl and the Meaning of Life.