Zou Qiang (born 13 August 1991 in Yichun) is a Chinese curler from Harbin.

Zou skipped the Chinese team (which also consisted of Shao Zhilin, Zhang Tianyu and Liang Shuming), at the 2013 Pacific-Asia Junior Curling Championships to a gold medal. The team went 7-1 after the double round robin portion of the tournament, which put them in first place, and a bye to the final, where they faced off against South Korea. They defeated the Koreans (skipped by Kim Jeong-min), 7-5 in the final.

Zou joined the Zang Jialiang team as lead in 2014 for one competitive season. The team won the gold medal at the 2014 Pacific-Asia Curling Championships. Zou was left off the team when they played in the 2015 World Championships.

The contents of this page are sourced from Wikipedia article on 28 Dec 2019. The contents are available under the CC BY-SA 4.0 license.
comments so far.
Comments
From our partners
Sponsored
Reference sources
References
http://www.worldcurl.com/player.php?playerid=29160
http://www.curlingzone.com/player.php?playerid=29160
http://www.curlingzone.com
http://results.worldcurling.org/Person/Details/6876 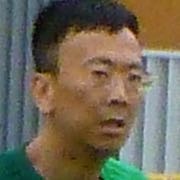