Zoryana Skaletska Minister of Healthcare of Ukraine since 2019

Zoriana Stepanivna Skaletska (Ukrainian: Зоряна Степанівна Скалецька, née Chernenko (Черненко); born 9 August 1980) is a Ukrainian lawyer, activist and politician. On 29 August 2019, she was appointed as the Minister of Healthcare of Ukraine in the Honcharuk Government.

Skaletska graduated from the National University of Kyiv-Mohyla Academy (2002). She studied at the Maria Curie-Skłodowska University (2002–2006). Doctor of Law.

She taught law at the National University of Kyiv-Mohyla Academy.

She is an expert in the Reanimation Reform Package organization. Skaletska is also an expert at the Center for Support of Reforms under the Cabinet of Ministers.

Skaletska is the director of the public organization "Health Forum" and a member of the World Association of Medical Law.

According to Ukrayinska Pravda, President Volodymyr Zelensky continued to hold interviews with candidates for Minister of Healthcare on 29 August 2019, the same day the Honcharuk Government was appointed with Skaletska being appointed Minister of Healthcare. On 31 August 2019, Servant of the People faction leader Davyd Arakhamia stated on ZIK channel that most likely (Healthcare Minister) Skaletska, would be replaced by Mikhail Radutsky (who according to Arakhamia needed "about three months to prepare" for the post.

The contents of this page are sourced from Wikipedia article. The contents are available under the CC BY-SA 4.0 license.
View Zoryana Skaletska 's image gallery
Image Gallery 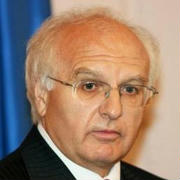