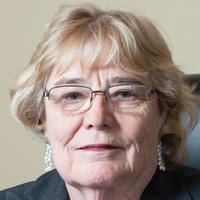 Susan Ellen "Zoe" Lofgren (/ˈzoʊ ˈlɒfɡrɪn/; born December 21, 1947) is an American politician serving as a U.S. Representative from California. A member of the Democratic Party, Lofgren is in her 13th term as a congresswoman, serving since 1994.

She was the 16th district's first female U.S. Representative, prior to portion of the district being redistricted into the 19th congressional district. The district covers much of Santa Clara County, including the cities of Gilroy, Morgan Hill, and most of San Jose. Lofgren has long served on the House Judiciary Committee and in the 116th Congress she is Chair of the House Administration Committee.

A San Mateo, California native in the area that later became Silicon Valley, Zoe Lofgren's parents worked as a school cafeteria employee and as a beer truck driver. Lofgren attended Gunn High School (1966) in Palo Alto, and while in high school, Lofgren was a member of the Junior State of America, a student-run political debate, activism, and student governance organization. She earned her B.A. degree at Stanford University (1970) and a Juris Doctor degree at Santa Clara University School of Law (1975).

After graduating from Stanford, Lofgren worked as a House Judiciary Committee staffer for Congressman Don Edwards when the committee prepared articles of impeachment against President Richard Nixon.

In 1978 she married John Marshall Collins.

Returning to San Jose, Lofgren worked in Don Edwards' district office, while at the same time earning her J.D. degree. After two years as partner at an immigration law firm in San Jose, she was elected first to the board of San Jose City College. She was then elected to the Santa Clara County Board of Supervisors in 1981 representing downtown San Jose and nearby communities, where she served for 13 years.

In 1994, Lofgren entered the Democratic primary in what was then the 16th District, after Edwards retired after 32 years in Congress. As a strong Democratic district, the primary was heavily contested. A decided underdog, she managed to defeat the favorite, former San Jose mayor Tom McEnery. Lofgren's victory virtually assured her of becoming only the second person to represent the district since its creation in 1963 (it was numbered as the 9th District from 1963 to 1975, as the 10th from 1975 to 1993, the 16th from 1993 to 2013, and has been the 19th since 2013). She has been reelected ten times with no substantial opposition.

Lofgren is the chair of the 46-member California Democratic Congressional Delegation. She serves on the Judiciary Committee and is the chair of the House Judiciary Subcommittee on Immigration, Citizenship, Refugees, Border Security, and International Law. In April 2011, she became the first member of Congress to call for federal investigation into the Secure Communities deportation program.

Beginning in 2009, Lofgren served as Chair of the House Ethics Committee. In doing so, she presided over a rare sanction of censure, against long-time member Charles B. Rangel.

In the Stop Online Piracy Act House Judiciary Committee hearings, she defended the current state of the internet in opposition of the bill. She has also opposed the data retention requirements in the H.R. 1981 (the Protecting Children from Internet Pornographers Act of 2011).

In February 2013, Lofgren became one of the sponsors of the Fair Access to Science and Technology Research Act to expedite open access to taxpayer-funded research.

In May 2016, Lofgren was publicly reprimanded during a House Judiciary Committee hearing after calling witness Gail Heriot of the United States Commission on Civil Rights an "ignorant bigot" because of the characterization of transgender individuals Heriot included in written testimony prior to the hearing. Following the verbal warning from acting committee chairman Steve King (R, Iowa), Lofgren responded, "I cannot allow that kind of bigotry to go into the record unchallenged."

In January 2020, Lofgren was selected as one of seven impeachment managers who will present the impeachment case against President Donald Trump during his trial before the United States Senate.

The contents of this page are sourced from Wikipedia article on 21 Jan 2020. The contents are available under the CC BY-SA 4.0 license.
View Zoe Lofgren 's image gallery
Image Gallery