Yusuf al-'Azma (Arabic: يوسف العظمة‎‎, ALA-LC: Yūsuf al-‘Aẓmah; 1883 – 24 July 1920) was the Syrian minister of war in the governments of prime ministers Rida al-Rikabi and Hashim al-Atassi, and the Arab Army's chief of general staff under King Faisal. He served as minister of war from January 1920 until his death while commanding Syrian forces against the French invasion during the Battle of Maysalun.

Al-'Azma was born to a prominent mercantile and landowning Damascene family of Turkmen descent in 1883. Al-'Azma graduated from the Istanbul-based Ottoman Military Academy in 1906 and then underwent additional military training in Germany until returning to Istanbul in 1909. There he enlisted in the Ottoman Army and promptly was assigned as a military attache to Cairo, Egypt. In 1914, al-'Azma served as Commander of the 25th Brigade on the front lines in Bulgaria during World War I. Later during the war, he was reassigned as a deputy of General Enver Pasha (Anwar Pasha) in Istanbul.

Toward the war's end, al-'Azma was appointed chief of staff of the Istanbul-based First Ottoman Army, but soon after defected to the Mecca-based Sharif Hussein who had launched the Arab Revolt against the Ottomans in 1916. In October 1918, Damascus was captured by the Sharifian Army under Emir Faisal and British forces, after which al-Azma returned to Damascus. Al-'Azma had joined al-Fatat, an Arab nationalist secret society founded in 1911, although it is not apparent when. He became a personal chamberlain of Emir Faisal and in January 1919, al-'Azma was appointed military attache to Beirut.

In Prime Minister Rida al-Rikabi's government, al-'Azma was promoted to Minister of War and on 26 January 1920 was also appointed Chief of General Staff by Emir Faisal to replace Yasin al-Hashimi who had been arrested by British forces and detained in Palestine. During his time in office, al-'Azma established the foundations and hierarchy of the modern-day Syrian Army. He gathered arms and ammunition left behind by the Ottoman Army in Syria, raised funds for new weaponry and by mid-1920, had created a military force of some 10,000 men, primarily consisting of Bedouin volunteers and former Ottoman officers.

Faisal declared the Arab Kingdom of Syria in March 1920. However, in the secret 1916 Sykes–Picot Agreement between the United Kingdom and France, the two powers negotiated the division of the Ottomans' Arab territories between themselves and in 1920 the League of Nations gave France a Mandate over Syria in April 1920. Prior to that, in 1919, the French occupied the Syrian coastal areas, sparking an Alawite revolt led by Saleh al-Ali and a revolt in the Aleppo region led by Ibrahim Hananu against the French presence. After the French were given the mandate over Syria, two principal camps emerged in the Syrian government; a minority faction favored a compromise with France due to its military superiority over the Arab forces (especially since the British withdrew their backing for King Faisal), while a majority faction rejected French rule by all means. Al-Rikabi led the minority faction while the majority camp was led by al-'Azma and supported by other young former Ottoman officers. Most of the Syrian government, including Foreign Minister Abd al-Rahman Shahbandar, backed al-'Azma's faction.

Al-'Azma in military uniform as Syria's Minister of War

French forces commanded by General Henri Gouraud landed in Beirut on 18 November 1919. Gouraud was determined to bring all of Syria under French control and demanded the immediate deployment of French forces to the Beqaa Valley. Against King Faisal's wishes, his delegate to General Gouraud, Nuri al-Said, agreed to the French deployment. However, when a French officer was assaulted by Shia Muslim rebels opposed to the French presence, Gouraud violated his agreement with al-Said and occupied the large city of Baalbek. The French deployment along the Syrian coast and Beqaa contributed to unrest throughout Syria and sharpened political divisions between al-'Azma's camp and those who sought compromise with the French. On 10 December 1919, Prime Minister al-Rikabi resigned amid pressure for him to do so by the nationalists and popular opinion. French forces later occupied parts of northern Syria in early July 1920.

On 13 July, al-'Azma declared emergency measures to the Syrian National Congress, including press censorship, the power to seize civilian vehicles for military use and a call for militias across the country to support the army. Inspired by Mustafa Kemal's successes against the French in Turkey, al-'Azma sought to follow in the latter's path against the French in Syria. Meanwhile, Yasin al-Hashimi had returned to Syria from Palestine and was tasked with inspecting al-'Azma's troops. He concluded that the Arab Army was woefully unprepared and under-equipped for a serious confrontation against the French Army. In a meeting of King Faisal's war cabinet, al-'Azma was visibly upset with al-Hashimi's conclusions. Regardless, he ultimately conceded that the army was in a precarious situation when informed that the lack of ammunition meant that each soldier would only be allotted 270 bullets for their rifle and each artillery piece could only be allotted eight shells. Despite this, all of the officers in the meeting declared their willingness to fight. On 14 July, France issued an ultimatum to the Syrian government to disband its army and submit to French control.

On 18 July, King Faisal and the Syrian cabinet met and all ministers except for al-'Azma agreed not to enter into war with the French. After King Faisal ratified the cabinet's decision, al-'Azma withdrew his troops from Anjar, the hills overlooking the Beqaa Valley from the east, and the Beirut-Damascus road. On 20 July, six hours prior to the ultimatum's deadline, King Faisal informed the French liaison in Damascus of his official acceptance of Gouraud's ultimatum. However, for unclear reasons, Faisal's notification did not reach Gouraud until 21 July. Sources suspicious of French intentions accused the French of intentionally delaying delivery of the notice to give Gouraud an official excuse for advancing on Damascus. However, there has been no evidence or indication of French sabotage. When news of Faisal's submission to the French and his disbandment of Arab army barracks in Damascus reached the populace, outrage ensued. A riot by soldiers and residents angry at King Faisal's decision was violently put down by Emir Zeid, resulting in some 200 deaths. Al-'Azma rejected demands to disband the army and implored King Faisal to give the Arab Army an opportunity to confront French forces.

Battle of Maysalun and death

About 12,000 French troops consisting of ten infantry battalions as well as cavalrymen and artillerymen backed by tanks and fighter bombers, began their advance on Damascus on 21 July. They first captured Anjar in the Beqaa Valley, where General Hassan al-Hindi's brigade had disbanded, without a fight. The French advance surprised King Faisal who believed that French military action would be avoided by agreeing to the 14 July ultimatum as General Gouraud had promised. In response to Gouraud's action, King Faisal agreed to al-'Azma's request for mobilization. About 300 of Hindi's disbanded troops from Anjar were ordered to re-mobilize at the Maysalun Pass, some 12 miles to the west of Damascus. Al-'Azma managed to assemble a few hundred regular troops, and around 1,000 volunteers, including Bedouin cavalry.

On 22 July, King Faisal attempted to delay the French advance by dispatching Sati al-Husri to negotiate with General Gouraud, who laid out new conditions to prevent his army's offensive and gave King Faisal one more day to deliberate on the terms. The next day, while the cabinet considered Gouraud's conditions, the French requested entry into Maysalun to access its water. The Syrians interpreted the request to be an excuse for Gouraud's army to enter Damascus without a fight and King Faisal ultimately rejected Gouraud's request and his new conditions. Afterward, al-'Azma departed Damascus to confront Gouraud's army in what became known as the Battle of Maysalun.

Al-'Azma's troops in Maysalun were mostly equipped with rusted rifles left by Ottoman troops and rifles used by Bedouin irregulars during the 1916 Arab Revolt as well as 15 cannons. The Arab force was composed of northern, central and southern columns with camel cavalry at the head. Al-'Azma led the central column which was backed by numerous civilian volunteers. Around dawn, at the approaches of Maysalun, clashes between Arab forces and the French Army took place, but most Arab resistance, which was largely uncoordinated, had collapsed by the first hour of battle. The Syrians had used up the little ammunition they arrived with and the militarily superior French Army broke the Arab lines.

Around 10:30 am French forces reached al-'Azma's headquarters. The mines that had been laid by the Syrians did not explode or at least did not seriously hinder the incoming French forces. With French troops about 100 meters away from him, al-'Azma rushed to an artilleryman and commanded him to fire at the French tanks. Before any shell was fired, al-'Azma was targeted by a tank crew and shot dead by French machine gun fire. He was hit in the chest and head. Al-'Azma was the only Arab officer to die in the battle. Sporadic clashes continued for another three hours. By then, Arab forces had retreated in disarray towards Damascus. The French Army entered the city on 25 July. In his memoirs, General Gouraud wrote that after the defeat of the Syrians, the latter's troops left "behind 15 cannons, 40 rifles, and a general ... named Yusuf Bey al-'Azma. He died a courageous soldier's death in battle."

Al-'Azma was married to a Turkish woman, with whom he had a daughter named Laila. Laila, who was a young child when al-'Azma died, married Cevad Asar, an Istanbul-based Turkish merchant with whom she had a son named Celal.

Al-'Azma's refusal to surrender to the French, his insistence on entering battle with inferior forces and his death commanding the Syrians in Maysalun made him a national hero in Syria and the Arab world. According to Philip S. Khoury, an American historian of the Middle East, al-Azma was "henceforth immortalized by Syrians as the supreme national martyr". His statue stands in a major square in central Damascus, with streets and schools named in his honor throughout Syria. Statues of al-'Azma are also present across the Middle East. According to historian Tareq Y. Ismael, the defeat of al-'Azma and the subsequent French takeover of Syria contributed to a popular attitude in the Arab world that exists until the present day which holds that "the West is not honorable in its commitments, speaks with a forked tongue about issues of democracy ... and will oppress anyone who stands in the way of its imperial designs". 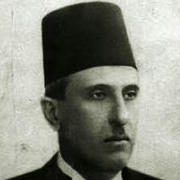 Paul II the Black of Alexandria