Yussuf Yurary Poulsen (born 15 June 1994) is a Danish footballer who plays for German club RB Leipzig as a second striker or winger.

Yussuf Poulsen began playing football at BK Skjold. At first he was a defensive player and in Kenneth Zohore he had a team mate, with whom he was to play later in the Danish youth national teams. After Zohoré joined FC Copenhagen, Yussuf Poulsen was moved to a position as a striker. At the age of 14 he joined the youth ranks of Lyngby BK. He played his first match as a senior on 4 December 2011, when he came on the pitch against AC Horsens after 84 minutes, as a substitute for Mathias Tauber. Poulsen did not immediately establish himself in the starting eleven, and he was at the end of the season only on five appearances. His club, Lyngby were also relegated from Superligaen. 5 August 2012 he scored his first goal at senior level, as well as for his club, when he in the second match in the 1. Division (second Danish league) scored the 1-0 winning goal against AB Gladsaxe. He was a regular player in the starting 11, and played 32 matches, scoring eleven goals.

His achievements attracted the interest of foreign and domestic clubs, and on 4 July 2013, he signed a contract with the controversial, and newly promoted 2. Bundesliga German side RB Leipzig. Poulsen earned promotion to the German top-flight Bundesliga with Leipzig in 2016. On game day 6 of the 2016-17 season, he scored his first Bundesliga goal in a 2-1 victory at home against FC Augsburg.

Poulsen got his debut for the Danish national team on October 11, 2014 against Albania. On June 13, 2015, he scored his first goal against Serbia in Denmark's 2–0 win.

Poulsen is the son of a Tanzanian father and a Danish mother. Poulsen's father worked on an oscillating between Africa and Denmark container ship and one day he had stayed in Copenhagen, when he fell in love with Poulsen's mother. His father died of cancer when Yussuf was only 6 years old. 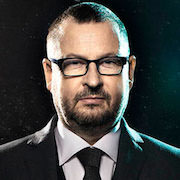