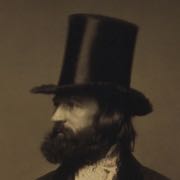 William Sidney Mount (November 26, 1807 – November 19, 1868) was an American painter best known for his genre paintings, although he also painted landscapes and portraits. He was a contemporary of the Hudson River School.

William Mount was born in Setauket, Long Island, New York, on November 26, 1807 to Julia Ann Hawkins and Thomas Shepard Mount, her husband. He trained at the National Academy of Design in New York City, and in 1832 was made a full academician. He died in Setauket on November 19, 1868.

Although he started as a history painter, Mount moved to depicting scenes from everyday life. Two of his more famous paintings are Eel Spearing at Setauket (1845, New York State Historical Association, Cooperstown) and Bargaining for a Horse (1835, New-York Historical Society, New York City).

The largest collection of his works is located in the Long Island Museum of American Art, History, and Carriages.

In addition to his painting, William Sidney Mount was a respected player and composer of the fiddle. He patented his own type of fiddle, the Cradle of Harmony, which had a curved hollow back that produced a sound louder than a standard violin.

His home and studio, the William Sidney Mount House, is a National Historic Landmark. One of the local elementary schools in The Three Village Central School District is named in his honor, as is PS 174 elementary school in Rego Park, Queens. A residential building located in the Roth Quad on the Stony Brook University campus is named after him.

His brother, Shepard Alonzo Mount (1804–1868), also an artist, best known as a portrait painter, became a National Academician in 1842. His niece Evelina Mount was also an artist; associated with the Hudson River School, she got some of her training from William and is known to have copied his paintings on occasion.

The contents of this page are sourced from Wikipedia article on 08 Mar 2020. The contents are available under the CC BY-SA 4.0 license.
View William Sidney Mount 's image gallery
Image Gallery