William II of Holland
The basics

Coat of Arms of William II. in a medieval manuscript.

He was the son of Floris IV and Matilda of Brabant. When his father was killed at a tournament at Corbie, William was only seven years old. His uncles, William and Otto (Bishop of Utrecht), were his guardians until 1239. William II of Holland as "Willem van Henegouwen" in stained-glass window from 1588 by Willem Thibaut, located in the Museum De Lakenhal

With the help of Henry II, Duke of Brabant and the archbishop of Cologne, he was elected as king of Germany after Emperor Frederick II was excommunicated. The next year, he decided to extend his father's hunting residence to a palace which met his new status. This would later be called the Binnenhof (Inner Court) and was the beginning of the city of The Hague. Meanwhile, after a siege of five months, William took Aachen from Frederick's followers. Only then could he be crowned as king. He gained a certain amount of theoretical support from some of the German princes after his marriage to Elizabeth, daughter of Otto the Child, Duke of Brunswick-Lüneburg, in 1252; but, although "William lacked neither courage nor chivalrous qualities... his power never extended beyond the Rhineland."

In his home county, William fought with Flanders for control of Zeeland. He made himself (being king of Germany) count of Zeeland. In July 1253, he defeated the Flemish army at Westkapelle (in modern-day Belgium) and a year later a cease-fire followed. His anti-Flemish policy worsened his relationship with France.

From 1254, he fought a number of wars against the West Frisians. He built some strong castles in Heemskerk and Haarlem and created roads for the war against the Frisians.

William married Elizabeth, daughter of Otto the Child, Duke of Brunswick-Lüneburg, in 1252. They had:

In battle near Hoogwoud on 28 January 1256, William tried to traverse a frozen lake by himself, because he was lost, but his horse fell through the ice. In this vulnerable position, William was killed by the Frisians, who secretly buried him under the floor of a house. His body was recovered 26 years later by his son Floris V, who took terrible vengeance on the West-Frisians. William was then buried in Middelburg. Contemporary sources, including the chronicle of Melis Stoke, portray William as an Arthurian hero. A golden statue of William can be found on the Binnenhof in The Hague, the inner court of the parliamentary complex of the Netherlands. 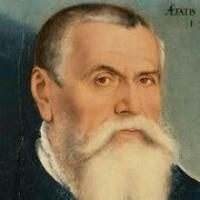 German Renaissance painter and printmaker in woodcut and engraving