Martens was a Chair of the Belgian Christian People's Party (now renamed Christian Democratic and Flemish party, CD&V) from 1972 to 1979, sitting as a Deputy in the Belgian Chamber of Representatives (federal parliament) from 1974 to 1991, and serving as a Senator from 1991 to 1994.

He co-founded the European People's Party (EPP) in 1976 and was EPP President from 1992 until his death. Poster calling for civil disobedience against the Martens government

From 1993 he was President of the European Union of Christian Democrats (EUCD), until its merger with the EPP in 1996. Martens also negotiated with Finnish conservative politician Sauli Niinistö the merger of the European Democrat Union (EDU) into the EPP (formally concluded in 2002). The successful fusion of all centre-right European organisations into the EPP – currently the largest transnational European political party with 75 member-parties from 40 countries – is widely recognised as an important achievement of his European political legacy.

From October 2000 to November 2001 he was also the President of the Christian Democrat International (CDI).

Martens held a doctorate in law, a degree in notarial studies, as well as a baccalaureate in Thomistic philosophy from the Catholic University of Louvain. He also studied international political science at Harvard University. He has practised law at the Ghent Court of Appeal.

Among numerous national and international distinctions, he was honoured in 1998 with the Charles V European Award for his contribution to European Union.

Martens had five children: two from his first marriage with Lieve Verschroeven (Kris and Anne) and three with Ilse Schouteden (Sarah, Sophie and Simon). After the birth of their twins in 1997 they married on 13 November 1998. Ilse Schouteden has a son from her previous marriage. In 2007 he divorced his second wife. On 27 September 2008 he married Miet Smet, a former Belgian minister. It was his third marriage and her first. After the death of his first wife, Martens was able to celebrate the marriage to Miet Smet in the Catholic Church, on 27 April 2013.

Martens died of cancer on 9 October 2013, at his home in Lokeren; he was 77. Elio Di Rupo, the Belgian prime minister, described him as a "true statesman and one of the fathers of federal Belgium". Martin Schulz, president of the European Parliament, paid tribute to him as a "statesman of Belgium, Europe and an outstanding leader of European Parliament". Jerzy Buzek, EPP MEP and former prime minister of Poland, described him as "irreplaceable".

He received an Official State funeral, which was attended by a Royal Aide-de-Camp of King Philippe, he was buried in the Cemetery of Campo Santo.

On 10 September 2009, Wilfried Martens presented his book Europe: I Struggle, I Overcome in a public event organized by the Centre for European Studies (CES), the official think-tank of the European People's Party.
The contents of this page are sourced from Wikipedia article. The contents are available under the CC BY-SA 4.0 license.
comments so far.
Comments
Trending today
All Film/TV Music Politics Sports Business Science Academia 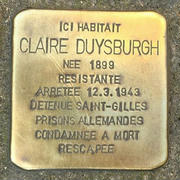