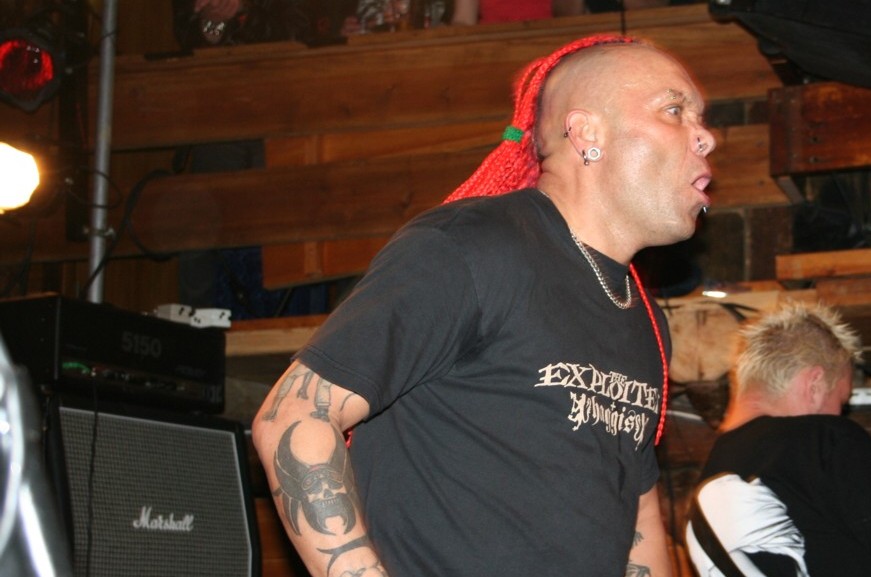 Walter David Buchan (born 24 July 1957), known as Wattie Buchan, is a Scottish punk rock musician. He is the lead vocalist for the band The Exploited.

Buchan was born in Edinburgh, Scotland on 24 July 1957. He served in the British Army as a soldier prior to joining The Exploited. He became interested in punk rock in the 1970s after hearing music by bands such as Sex Pistols. Buchan is married to Gena Buchan.

The Exploited are a Scottish punk rock band from the second wave of UK punk, formed in 1978. Originally playing styles such as street punk and oi!, the band played styles such as crossover thrash later on. Formed in Edinburgh by Walter "Wattie" Buchan, they signed to Secret Records in March 1981 and released their debut EP Army Life. The album Punks Not Dead followed in the same year. Despite many lineup changes, the band continued into the 2000s, and has developed a worldwide following. In 2012, the band began writing material for a new album.

In February 2014, Buchan suffered a heart attack on stage in Lisbon, Portugal. The Exploited had been touring with Hatebreed and Napalm Death. He was admitted to S. José Hospital in Lisbon after the show and later moved to S. Marta Hospital to recover and undergo heart surgery. The Exploited cancelled the remaining of the Tour Of Chaos 2014 due to Buchan's condition. On 29 June 2014, The Exploited's Facebook page updated on Buchan's condition, saying that after a successful heart operation, the band is practising new material.

Feuds and criticism towards other musicians

Buchan is notorious for strongly criticizing other musicians and starting feuds with them. The Exploited's Punks Not Dead album's title is a reaction to anarcho punk contemporaries Crass' song "Punk is Dead". He has been open about disliking Crass saying "People listen to bands and believe what they sing about. Crass was just words." He stated "they were full of shit. They said they believed in this and that, but bought record companies under other people’s names so it couldn’t be traced back to them. It was all about money with them." Other than Crass, Buchan has criticized multiple other bands and musicians including Henry Rollins, Jello Biafra, Green Day, Bad Religion, Linkin Park, The Offspring and Descendents. Buchan has also criticized emo saying "Emo's shit! They can stick it up their ass!"

At an awards ceremony for a music magazine, Buchan was presenting an award that was won by Green Day, a band he had previously said that he hated. Buchan alleged that during the after-party Green Day member Billie Joe Armstrong confronted him and said "when you die, I'm going to be standing over your grave, laughing at ya." The two then had to be separated by onlookers.