Wang Tao (Chinese: 王涛; born December 13, 1967 in Beijing) is a retired Chinese table tennis player, the current head coach of the Bayi Gongshang club in the China Table Tennis Super League, and a member of the Chinese Olympic Committee. Wang Tao is left-handed, and uses a shakehand close-to-the-table fast hitting style, with very hard sponged invert rubber in the forehand and pimple rubber in the backhand, which is rather unusual.
Wang Tao was mentioned in season 4, episode 8 of the American television series The Office. In the episode, entitled "The Deposition," the character Dwight Schrute mentions Wang Tao as one of his table tennis heroes. 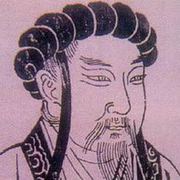