Waldjinah (born 7 November 1945) is an Indonesian traditional singer. She is most known for the song Walang kekek, which made Javanese keroncong music known throughout Indonesia. She has also worked with other Indonesian artists, including Gesang Martohartono and Ismail Marzuki.

Waldjinah was born in Surakarta, Indonesia, on 7 November 1945 as the tenth child of her family. Her mother sold food in a market and her father worked as a painter in a batik factory. Waldjinah was inspired to become a singer from listening to traditional Javanese songs at the factory where her father worked. During her high school years, she became interested in keroncong music.

In 1958, Waldjinah entered a singing competition held by the Radio Republik Indonesia radio station in Surakarta. After winning the competition, her professional career began and she became a celebrity. In 1960, Waldjinah was voted the singer with most potential at a national competition in Jakarta.

Waldjinah has recorded 200 albums and over 1500 songs. She is known for the hit song Walang kekek, which made Javanese keroncong music known throughout Indonesia. She has worked with other Indonesian artists, including Gesang Martohartono, Mus Mulyadi, Andjar Any, and Ismail Marzuki.

Waldjinah has been married twice. Her first husband acted as the manager of both her backing band, Orkes Keroncong Bintang Surakarta, as well as of her own career. He passed away in 1985. She met her second husband four years later, who also worked as her manager. She has five children, as well as eight grandchildren and three great-grandchildren. Her son Ary Mulyono is an accomplished instrumentalist also involved with keroncong music, and is leader of her backing band.

Waldjinah owns the Galeri Walang Kekek, an art gallery located in Grogol, Sukoharjo, which exhibits her collection of batik cloth.

The contents of this page are sourced from Wikipedia article on 22 Apr 2020. The contents are available under the CC BY-SA 4.0 license.
View Waldjinah 's image gallery
Image Gallery 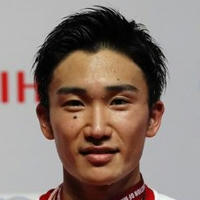