A product of the Vojvodina youth system, Ubiparip made six appearances for the club in the 2006–07 Serbian SuperLiga. He also spent some time on loan at Proleter Novi Sad, Borac Čačak, ČSK Čelarevo, and Horgoš. In the summer of 2008, Ubiparip became a member of Spartak Subotica, helping them to promotion to the top flight in the 2008–09 season. He subsequently scored 10 goals in 25 games during the 2009–10 Serbian SuperLiga.

In January 2011, Ubiparip was transferred to Lech Poznań on a four-and-a-half-year contract. He made seven appearances and scored three goals in the 2014–15 Ekstraklasa, helping them win the title. In total, Ubiparip scored 12 league goals in 58 appearances for Lech Poznań.

After Vasas, he also played for Novi Pazar, Górnik Łęczna and Željezničar. With Željezničar he won the 2017–18 Bosnian Cup.

On 6 September 2018, Ubiparip signed a two-and-a-half year contract with Tuzla City. Since signing with Tuzla City, he has been their most important player, scoring so far 24 goals in 43 league matches for the club.

A former Serbia U19 international, Ubiparip was capped twice for the Serbia under-21 team in 2010, scoring once.

The contents of this page are sourced from Wikipedia article on 27 Apr 2020. The contents are available under the CC BY-SA 4.0 license.
View Vojo Ubiparip 's image gallery
Image Gallery 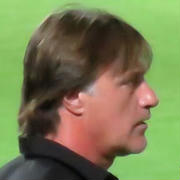