Vladimir Ivković (25 July 1929 – 10 March 1992) was a Croat water polo player who competed for Yugoslavia in the 1952 Summer Olympics and in the 1956 Summer Olympics. He was born in Dubrovnik. Ivković was part of the Yugoslav team which won the silver medal in the 1952 tournament. He played two matches. Four years later he won again the silver medal with the Yugoslav team in the 1956 tournament, and again he played two matches.

The contents of this page are sourced from Wikipedia article on 19 Apr 2020. The contents are available under the CC BY-SA 4.0 license.
comments so far.
Comments
From our partners
Sponsored
Reference sources
References
https://www.hoo.hr/hr/sportasi/biografije-sportasa?filterime=&filterprezime=&idsportas=&filtersport=10&filternatjecanja=&idsportas=20187
https://www.sports-reference.com/olympics/athletes/iv/vladimir-ivkovic-1.html
Trending today in 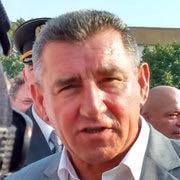