Vladimir Adolfovich Ilyin (Russian: Влади́мир Адо́льфович Ильи́н; born 16 November 1947) is a Soviet and Russian actor. He was awarded People's Artist of Russia in 1999.

Vladimir Ilyin has starred in over 111 films 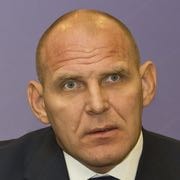