Vladimir Grigoryevich Zakharov (born on 18 September 1901 in Bogodukhov, today part of Donetsk, and died in 1956 on 13 July in Moscow,) was a Soviet Russian composer. He was born near Donetsk in the present-day Ukraine. In 1912-1921 he lived in the city of Taganrog, where he studied at the Boys Gymnasium and attended music classes by Valerian Molla at the Taganrog School for Music. He graduated the Rostov Conservatory in 1927. His long-term connection with the Pyatnitsky Russian State National Choir (since 1932) gave him many chances composing choral music. Most of his songs are in peasant way. Even sometime later, no one can tell whether one of his famous song was a composition or an arrangement of a folk piece.

In the 1920s, he and other composers formed the Russian Association of Proletarian Musicians (RAPM) and became an active member of this association.

In 1948 he was appointed one of the Principal Secretaries of Soviet Union of Composers. He was an active figure in the persecution on "formalist" composers. Those who were denounced by him include Dmitry Dmitrievich Shostakovich, Sergei Prokofiev, Aram Khatchaturian, Nikolai Myaskovsky and Vano Muradeli. 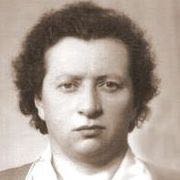