Virginia "Ginni" Lamp Thomas (born February 23, 1957), an American attorney and lobbyist who founded Liberty Consulting. She had previously founded the conservative advocacy group Liberty Central, and served as its president until its merger with the Patrick Henry Center for Individual Liberty. She writes columns for The Daily Caller and previously worked at The Heritage Foundation.

Thomas is an anti-cult activist, having previously been a participant in the Lifespring self-awareness movement.

She is the wife of U.S. Supreme Court Associate Justice Clarence Thomas. Her lobbying activities have occasionally been raised as a potential source of conflict of interest for her husband.

Thomas grew up in Omaha, Nebraska, the youngest of four children born to Donald Lamp, a successful engineer who owned his own firm, and Marjorie Lamp, a stay-at-home mother. Her parents were Republicans.

Thomas attended Westside High School in Omaha, where she was a member of the student government, the debate club, and the Republican club. While she was still in high school, her ambition was to be a member of Congress. She enrolled in a woman's college in Virginia because of its proximity to Washington, D.C., subsequently transferred to the University of Nebraska, and then to Creighton University to be closer to a boyfriend. She received a Bachelor of Arts in Political Science and Business Communication from Creighton University (1979) and a Juris Doctor from Creighton University School of Law (1983), after a hiatus working as a legislative aide for Congressman Hal Daub.

When Congressman Daub took office in 1981, Thomas moved to Washington, D.C., and worked in his office for 18 months. After completing her degree at Creighton University School of Law (1983), she worked one more year for Daub in Washington as his Legislative Director. From 1985 to 1989, she was employed as an attorney and labor relations specialist at the United States Chamber of Commerce, attending congressional hearings where she lobbied on behalf of the interests of the business community. Her advocacy included arguing against the passage of the Family and Medical Leave Act (FMLA), which requires larger employers to provide temporary unpaid leave to employees to care for a new child or during a serious personal or family illness. In 1989, she became Manager of Employee Relations at the Chamber of Commerce. 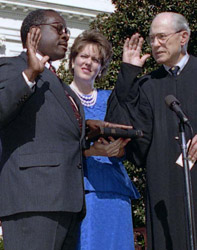 In 1991, Thomas returned to government service in the Legislative Affairs Office of the United States Department of Labor, where she argued against comparable-worth legislation that would have mandated equal pay for women and men in jobs deemed to be comparable.

That year, her husband, Clarence Thomas was nominated by President George H. W. Bush to fill the open seat on the U.S. Supreme Court left by the retirement of Justice Thurgood Marshall. She attended the contentious Senate confirmation hearings and stood by her husband as he was accused of sexual harassment.

During the confirmation hearings, several Democratic Senators claimed that her job with the Labor Department might create a conflict of interest for her husband if he was seated on the Supreme Court. After her husband was narrowly confirmed by a majority vote of 52 to 48, Mrs. Thomas described the televised scrutiny and confirmation process as a "trial by fire".

Her next job was as a Policy Analyst for Congressman Dick Armey, who was then the Republican House Conference Chairman. In 1994, conflict of interest was raised again while Thomas was working for Armey.

By 2000, she was working for the Heritage Foundation. Conflict of interest was raised yet again because she was collecting résumés for potential Presidential appointments in the George W. Bush Administration when the Supreme Court was deciding Bush v. Gore. She continued to work at the Heritage Foundation during the administration of George W. Bush, serving as the White House Liaison for the think tank. She serves on the Alumni Advisory Board of her alma mater, Creighton University School of Law.

In late 2009, Thomas started a nonprofit lobbying group, Liberty Central, to organize conservative activists, issue score cards for Congress members, and be involved in elections. The group is aimed at opposing what Thomas has called the leftist "tyranny" of President Barack Obama and Congressional Democrats and "protecting the core founding principles" of the nation. Thomas was interviewed by Sean Hannity on his Fox News show Hannity in June 2010. When asked about potential conflicts between her Liberty Central activities and her husband's position, Thomas replied, "there's a lot of judicial wives and husbands out there causing trouble. I'm just one of many."

In February 2011, Politico reported that Thomas was the head of a new company, Liberty Consulting, which filed incorporation papers in mid-November 2010. The company's website states that clients can use Thomas's "experience and connections" to help "with "governmental affairs efforts" and political donation strategies. The Washington Post described Liberty Consulting as "a one-woman shop" where Thomas advised political donors how to direct funds in the post-Citizens United landscape.

In July 2013, Thomas was identified as a key member of Groundswell, a coalition of right wing activists and journalists attempting to make political change behind the scenes through lobbying of high-level contacts.

During the 2016 Republican primaries, she endorsed Ted Cruz. After he dropped out, she supported Donald Trump.

Thomas serves on the Advisory Council of the organization Turning Point.

Thomas has stirred controversy due to her inflammatory political rhetoric and promotion of conspiracy theories. In 2018, she shared Facebook posts that characterized California as a war zone, alleged voter fraud by Democrats in four elections, described the teenage survivors of the Parkland shooting "dangerous to the survival of our nation" (because they advocated for gun control) and baselessly accused President Obama and Hillary Clinton of being involved in wiretapping then-candidate Donald Trump. In 2017, she held a speech saying the left wants "to extinguish our rights," that the left "moves its forces across our country," and that the NFL was "mainstreaming anti-Americanism" because some NFL players kneeled during the national anthem to protest police brutality and racial discrimination. She harshly criticized Paul Ryan and Mitch McConnell as "useful idiots" for "LiberalFascists" because they did not condemn violence on the left during the violent white supremacist rally in Charlottesville, Virginia in 2017. She has made videos for the Daily Caller where she wondered whether "cultural Marxists have already won in our country."

Virginia and Clarence Thomas married in 1987. They live in Virginia.

Thomas converted from Protestantism to the Catholic faith in 2002. She was inspired by her husband's devotion of praying the Litany of Humility and participating in the Mass. She credits Justice Antonin Scalia, and his wife Maureen, for their love, praying Clarence Thomas back into the Church.

On October 9, 2010, Thomas left a voicemail message for Anita Hill, whose accusations of sexual harassment complicated her husband's Senate confirmation hearings 19 years earlier. In the voicemail, Thomas said that Hill should apologize to Thomas's husband. Hill responded that she believed there was nothing to apologize for and said that her 1991 testimony about her interactions with Clarence Thomas was truthful. A couple of months later, Virginia Thomas said that the message to Anita Hill "was probably a mistake" and from her point of view, "a private matter".

In the 1980s, while a congressional aide, Thomas took training with the self-awareness program Lifespring. In 1987, she related to The Washington Post that, during her training several years earlier, she had been "confused and troubled" by lessons such as one where trainees were told to disrobe to bikinis and bathing suits then "made fun of fat people's bodies and riddled one another with sexual questions". After realizing that membership in her Lifespring group was separating her from her family, friends, and co-workers, Thomas began what proved to be a difficult and months-long process of breaking away. At one point, she hid in another part of the U.S. to avoid a constant barrage of high-pressure phone calls from Lifespring members, who felt they had a duty to keep her in the organization.

Thomas ultimately came to believe that Lifespring was a cult. After leaving the group in 1985, she sought counseling and joined the Cult Awareness Network. She became a critic of controversial religious groups, speaking on panels and organizing anti-cult workshops for Congressional staffers in 1986 and 1988. In a 1991 interview, Thomas remarked, "I was once in a group that used mind control techniques"; and she called its members "pretty scary people."