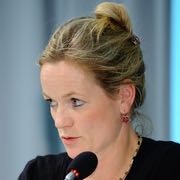 Viola von Cramon-Taubadel, often officially referred as simply Viola von Cramon (Halle (Westphalia), 23 March 1970) is a German politician of Alliance '90/The Greens who has been a member of the European Parliament since 2019. She previously represented Lower Saxony in the Bundestag, the German federal parliament, from 2009 to 2013.

Viola von Cramon graduated from Ratsgymnasium Bielefeld in 1989. From 1990 to 1991 she did an internship in field of Agriculture at Demeter Charity Organization in Upper Bavaria. From 1992 to 1993, she was an Erasmus Scholar at Wye College in Kent Country followed by the Language and Study visit to Russia in 1993, traineeship in Voronezh and Belgorod within the World Bank Feasibility study project in 1994 and study visit to Estonia in 1995.

In 1996, von Cramon was employed as an assistant to the Ukrainian Government within the economic-political project of German Government in Kiev. She continued studies and graduated University of Bonn in 1997 with a degree in Agricultural economics. From 1993 to 1996, parallel to her studies and professional activities, she lectured at Agra-Europe and other publishing houses.

From 1997 to 2004 von Cramon was operating independent projects in Central and Eastern Europe. In 2006-2007 she attended lectures at Cornell University in Ithaca, New York.

Von Cramon has been a member of the Green Party since 2001.

Von Cramon was a member of the German Bundestag from 2009 until 2013. Within her parliamentary group, she served as spokeswoman for the foreign relations of the European Union and sports. Besides that, she was also responsible for relations to China, Central Asia and the Eastern Partnership countries.

Member of the European Parliament, 2019–present

In August 2018, von Cramon announced that she would run for a parliamentary seat in the 2019 European elections. Since becoming a Member of the European Parliament, she has been serving on the Committee on Foreign Affairs.

In addition to her committee assignments, von Cramon is part of the Parliament's delegations to the EU-Ukraine Parliamentary Association Committee and to the Euronest Parliamentary Assembly. She is also a member of the Democracy Support and Election Coordination Group (DEG), which oversees the Parliament’s election observation missions. In response to an invitation by President Hashim Thaçi, Federica Mogherini appointed her to lead an EU mission to observe the 2019 elections in Kosovo.