Vijaygupta Maurya was born Vijayshankar Murarji Vasu in Porbandar (now in Gujarat, India) in 1909. He completed his high school education at Bhavsingh High School in Porbandar. He studied law in Bombay (now Mumbai) and returned Porbandar in 1933 to start his legal practice. Four years later, he was elevated to the position of a judge. Due to his passion for bird watching, he wrote articles on birds for Prakriti magazine.

Career as Journalist and Writer

Between financial struggles, he wrote for Prakriti magazine. Few years later, he was invited to write for a Gujarati newspaper Janmabhumi. He wrote articles on birds and animals printed on the last page of Janambhumi Pravasi with limited space and eventually became an editor and writer of the whole page. He wrote on varied subjects including science, astronomy and biology.

In 1973, he left Janmabhumi Pravasi and became a freelancer writing for various magazines. He wrote several books during that time that included the theme of serving interesting information rolled up in stories as well as books based on true events. His career as a writer spanned over 46 years but he continued to struggle financially. During last years, he had several ailments including poor vision, back pain and the Parkinson's disease. After a long illness, he died on 10 July 1992.

Some of the Gujarati books authored by Vijaygupta Maurya

The contents of this page are sourced from Wikipedia article on 07 Mar 2020. The contents are available under the CC BY-SA 4.0 license.
comments so far.
Comments
From our partners
Sponsored
Reference sources
References
http://www.divyabhaskar.co.in/article/100222160042_vijaygupt_maurya.html
http://harshalpushkarna.blogspot.com/2009/03/vijaygupta-maurya.html
http://isni.org/isni/000000003355342X
https://id.loc.gov/authorities/names/n88677148
https://viaf.org/viaf/45887436
https://www.worldcat.org/identities/containsVIAFID/45887436
Trending today in 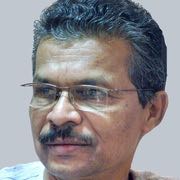