Following a stint as an accountant, Sethupathi began considering an acting career. He started his film career working as a background actor, playing minor supporting roles for over five years, before playing his first lead role in Seenu Ramasamy's Thenmerku Paruvakaatru (2010). He went on to play the villain role in Sundarapandian (2012), and got his breakout roles with the films Pizza (2012) and Naduvula Konjam Pakkatha Kaanom (2012). He continued to star in successful films such as Soodhu Kavvum (2013), Idharkuthane Aasaipattai Balakumara (2013), Pannaiyarum Padminiyum (2014), Naanum Rowdy Dhaan (2015), Sethupathi (2016), Kadhalum Kadandhu Pogum (2016), Dharma Durai (2016) and Kavan (film) (2017) all of which earned critical and commercial success, and turned Vijay Sethupathi into a popular "indie-film star" in Tamil cinema.

Vijaya Gurunatha Sethupathi was born in Rajapalayam, Virudhunagar District, grew up in Rajapalayam until he moved to Chennai in class six. He attended the MGR Higher Secondary School in Kodambakkam. According to Sethupathi, he was a "below-average student right from school" and was neither interested in sports nor extra-curricular activities.

Sethupathi did a series of odd jobs for pocket money: Salesman at a retail store, cashier at a fast food joint and a phone booth operator. He graduated with a B.Com degree from the Dhanraj Baid (D.B.) Jain College (affiliated to University of Madras) in Thoraipakam. A week after he finished college, he joined as an account assistant at a wholesale cement business. He had to take care of three siblings and moved to Dubai, U.A.E as an accountant only because it paid him four times more than what he was making in India. In those two years in Dubai, he fell in love with Jessie from Kollam in Kerala, whom he met online and married her in 2003.

Unhappy with his job, he returned to India in 2003. After a brief stint in the interior decoration business with friends, he joined a marketing company that dealt with readymade kitchens when he saw Koothupattarai’s poster. He recalls that once Balu Mahendra remarked that he had a "very photogenic face", and motivated him to pursue an acting career.

He subsequently joined the Chennai-based theatre group Koothu-P-Pattarai as an accountant and actor where he observed actors from close quarters. He made his beginnings as a background actor, particularly playing the role of the lead character's friend in a few films. Besides he acted in television series, including the well-known series Penn that began in March 2006, as well as several short films as part of the television show Nalaya Iyakunar for Kalaignar TV. He worked with Karthik Subbaraj on many short films, who later cast him in his first feature film, subsequently yield him the Best Actor award for one of his films at the Norway Tamil Film Festival short film competition.

Sethupathi accompanied a group of actors who went to director Selvaraghavan's studio to audition for his gangster film Pudhupettai (2006) and was selected to play Dhanush's friend in the film. Following Pudhupettai, he was associated with a Tamil-Kannada bilingual film called Akhaada. While he was selected to play the lead in the Tamil version, the director offered him the antagonistic role in its Kannada version. However, the film did not see a theatrical release. After making an appearance in Prabu Solomon's Lee (2007), he was cast by director Suseenthiran in minor supporting roles in his first two projects, Vennila Kabadi Kuzhu (2009) and Naan Mahaan Alla (2010). Sethupathi would later credit Suseenthiran with having had an "important role in helping him realise his dreams". Suseenthiran, furthermore, recommended Sethupathi to director Seenu Ramasamy and Sethupathi landed his first lead role in Ramasamy's drama film Thenmerku Paruvakaatru (2011), in which he portrayed a shepherd., the film went on to win three National Film Awards including the prize for the Best Tamil Feature Film of that year.

2012 marked a turning point in Vijay Sethupathi's career; all his three releases were critical and commercial successes, resulting in a rise in his popularity. He was first seen in a negative role in Sundarapandian which featured M. Sasikumar in the lead role, and then played the lead roles in the directorial debuts of Karthik Subbaraj and Balaji Tharaneetharan, the thriller film Pizza and the comedy entertainer Naduvula Konjam Pakkatha Kaanom, respectively. He enacted the role of Michael, a delivery boy in the former and a young man named Prem who sustains short-term memory loss two days before his marriage in the latter, with his performance in both films being praised by critics. Malini Mannath from The New Indian Express in her review of Pizza wrote: "Sethupathy, a delight to watch, carries the entire film on his shoulders. His voice perfectly modulated, he proves his versatility and acumen to handle any role. Michael’s nightmarish experience, and his fear and horror when he’s trapped in the mansion, is perfectly conveyed by the actor". With regard to Naduvula Konjam Pakkatha Kaanom, The Times of India reviewer M. Suganth cited that Sethupathy "continues his superb show from Pizza conveying Prem's peculiar condition with vacant stares and amusing pauses between his lines", further noting: "That he never makes the character's repetitive dialogues irritating is a proof of his terrific timing". According to a survey published by BBC Tamil, Pizza and Naduvula Konjam Pakkatha Kaanom claimed the first two spots in a Best Films list, and both films competed at the 2013 Norway Tamil Film Festival, while Sethupathi won two awards, one for each film, at the Edison Awards and the Big FM Tamil Entertainment Awards. By the end of the year, Indiaglitz.com named Sethupathi as one of 2012's best Tamil actors, and called him "the rising star of Kollywood". whilst film critic Baradwaj Rangan stated that Sethupathi had become "[...] sort of [an] indie-film star, the first ever in Tamil cinema".

In 2013, he was first seen in the crime comedy Soodhu Kavvum that saw him playing the role of a forty-year-old kidnapper. The film opened to extremely positive reviews and has become a huge success at the box office. Malini Mannath from The New Indian Express in her review wrote: "It’s laudable that the actor doesn’t hesitate to take a role that has him playing a 40-year-old man, greying and with a paunch". The Times of India reviewer N. Venkateswaran cited that "His knack of choosing good roles and working with new directors brimming with ideas will stand him in good stead, as also the work he puts in to portray each character. He put on weight and grew a beard to play Das, and the look fits him to a 'T'". His next release was Idharkuthane Aasaipattai Balakumara, directed by Gokul. It was met with positive reviews by critics and Vijay Sethupathi's performance was highly praised. Haricharan Pudipeddi from The New Indian Express in his review wrote : "Vijay Sethupathi has become a darling of the masses. Scene after scene, the audience hoots and cheers for him in unison." Rediff reviewer S.Saraswathi cited that "His greatest strength lies in being able to counter the stereotypical image of heroes in commercial cinema today. In every film, we see him in a completely different avatar, and his latest film is no different. Vijay Sethupathi seems to have the knack of choosing the right role and script and he effortlessly slips into his character as Kumar." Behindwoods stated that Vijay Sethupathi as Sumar Moonji Kumar has done it yet again, raising his pennant higher, making himself more visible to his fervent fans. The depth in his innocence and the foolhardiness in his love are a couple of things that stand tall in the character he plays, and Vijay Sethupathi has pulled it off in grand style. The actor is a revelation in the climax sequence, showing the other dimension of his acting.

In 2014, His films Rummy and Pannaiyarum Padminiyum were released, both directed by debutants. Pannaiyarum Padminiyum, based on its same-titled short film, revolved around an old man and his vintage car Premier Padmini, with Sethupathi starring as its chauffeur. The film opened to predominantly positive reviews from critics and is the only Tamil film which has been selected to be screened at the 19th International Film Festival of Kerala. The same year Akhaada was being dubbed into Tamil as Edakku by its makers, to profit from Sethupathi's popularity in Tamil Nadu. The film was being promoted as a Vijay Sethupathi film, with the actor being prominently featured in the posters, although he had only a minor role in it, and Sethupathi stated that the audience would feel cheated after seeing the film, if it was promoted this way. He was next seen in the action drama Vanmam directed by debutant Jaikrishna. Though the film was met with average reviews, Vijay Sethupathi's performance was praised by critics. Malini Mannath from The New Indian Express in his review wrote : It’s Vijay Sethupathi’s film the whole way. The actor renders a power packed performance, capturing each nuance of the character with precision and understanding. Behindwoods stated that the stand out element in the film is Vijay Sethupathi, who has managed to attach his performance to the nativity of the location to the best of his ability. The actor scores effortlessly in some portions, one of them being the scene where he breaks into Kreshna’s house under the influence of alcohol.

In 2015, he was first seen in the political thriller Purampokku Engira Podhuvudamai directed by S. P. Jananathan. It was met with positive reviews by critics and Vijay Sethupathi's performance was highly praised. The Times of India reviewer M. Suganth cited that "Vijay Sethupathi redeems everything with a sensitive performance.Balusamy might be the film's central character, but it is Yamalingam who is its beating heart." Rediff reviewer S.Saraswathi cited that "Vijay Sethupathi, as a tormented soul loath to pull the lever that will release the trapdoor and take a life, is perhaps the best." In July 2015, his first movie as producer Orange Mittai directed by Biju Viswanath got released and met with positive reviews by the critics and entertainment portals. He was next seen in the rom-com Naanum Rowdy Dhaan directed by Vignesh Shivan which became his highest-grossing movie till date.

In 2016, he was first seen in the police action drama Sethupathi directed by S. U. Arunkumar. Sethupathi received praise for his performance. Vishal Menon of The Hindu said that it was a good thriller and a better family drama. Latha Srinivasan of DNA wrote that there were no loud over-the-top dialogues and punchlines that were typical of all on-screen cops in Tamil films and Vijay Sethupathi outshone many other Kollywood heroes as the cop. Malini Mannath of The New Indian Express wrote that it is another feather in the cap for Vijay Sethupathi, who revealing his versatility yet again handles his role with remarkable understanding. Anupama Subramaniam of Deccan Chronicle wrote that Vijay Sethupathi’s moves are full of energy and enthusiasm and his impeccable dialogue delivery is a treat to watch. He was next seen in the romantic comedy Kadhalum Kadandhu Pogum. His next release was Iraivi followed by Dharma Durai by Seenu Ramasamy, Aandavan Kattalai by Manikandan and Rekka .

Now he is busy with films like Vikram Vedha directed by Pushkar Gayathri and 96.

In 2014, Chennai Mayopathy Institute of Muscular Dystrophy & Research Center has organized a rally on 3 August at Marina Beach to raise awareness on Muscular Dystrophy. Vijay Sethupathi has taken part in the rally along with actresses Gayathrie and Varalaxmi Sarathkumar.

Vijay Sethupathi has three siblings, one elder brother, one younger brother and one younger sister. He returned from Dubai in 2003 to marry his girlfriend, whom he had met and dated online. He has two children, a son Surya and a daughter Shreeja. He named his son Surya in the remembrance of his friend who died during his school days. Surya made his acting debut playing the younger version of Vijay Sethupathi in Naanum Rowdydhaan. 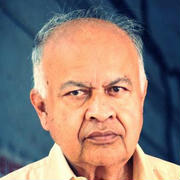