Vasily Borisovic Strelnikov (Russian: Василий Боpисович Стрельников, also known as друг агрессивно-прогрессивной молодёжи) is a well-known Russian-American New York City-born VJ, most commonly known to the Boomerang Generation as the voice behind MTV Russia, which he was during the 1998/2002 timeframe. Vasily arguably had peak popularity with his morning show called Weekend's Whim (Викендный Каприз).
Vasily was born in New York City on May 14, 1962 to a Russian father and a Russian mother, a Soviet embassy officer. His father, Boris Strelnikov, was a prominent Soviet-era journalist, who worked for many years as a correspondent of the Pravda newspaper based in the United States. He holds dual citizenship as both an American and a Russian.
Vasily began his career as a radio presenter in the 1980s, working for Radio Moscow World Service. He was best known as the host of the 'Listeners’ Request Club', one of the most popular programmes on the air, which, due to its informal presentation, contrasted with most other shows. During 2006 Vasily hosted Russian: Мозголомы - a Russian version of the Brainiac: Science Abuse TV programme on REN TV. As of 2007 he hosts Russian: Упс! - another Russian TV programme.
As of 2011 he has returned to the Voice of Russia to host the mailbag show, "From Moscow With Love". 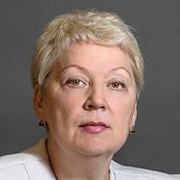 Education and Science Minister of Russia