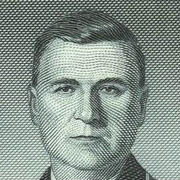 Vasily Danilovich Sokolovsky (Russian: Васи́лий Дани́лович Соколо́вский; July 21, 1897 – May 10, 1968) was a Soviet general and Marshal of the Soviet Union who led Red Army forces on the Eastern Front during World War II. As Georgy Zhukov's chief of staff, Sokolovsky helped plan and execute the Capture of Berlin.

Sokolovsky was born into a peasant family in Kozliki, a small town in the province of Grodno (now in Białystok County in Poland, then part of the Russian Empire). He worked as a teacher in a rural school, where he took part in a number of protests and demonstrations against the Tsar.

He began his formal military schooling in 1919, but was frequently called up by the Red Army and forced to leave his schoolwork. He graduated in 1921 and became the chief of staff of a division stationed in Turkmenistan. He was wounded during a battle near Samarkand and subsequently decorated for bravery. After the Russian Civil War ended in 1922/1923 he held a number of staff positions, eventually becoming the chief of staff for the Moscow Military District and then the Deputy Chief of the General Staff, the position he held at the beginning of the German invasion of the Soviet Union, Operation Barbarossa (22 June 1941).

In December 1941, with German forces a mere 20 kilometers from Moscow, Sokolovsky was made the chief of staff of the Soviet Western Front, where he was able to help co-ordinate the Soviet winter counter-attacks that forced the Germans away from Moscow. He remained in this position until February 1943, when he became the commander of the Western Front.

He led this front through the Battle of Kursk. In the summer of 1943, the Soviets launched Operation Kutuzov on 12 July against Army Group Centre in the Orel salient, directly north of the Kursk salient. The Bryansk Front, under the command of Markian Popov, attacked the eastern face of the Orel salient while the Western Front, commanded by Sokolovsky, attacked from the north. The operation ended on 18 August 1943 with the Soviet capture of Orel and collapse of the Orel bulge. In October–November 1943, Sokolovsky commanded the Western Front in failed Soviet Orsha offensives against Gotthard Heinrici's 4th Army in the Orsha region of Belarus. In April 1944 the Western Front was broken into two parts and Sokolovsky was made chief of staff of 1st Ukrainian Front under Georgy Zhukov. He remained in this position until the end of the war in 1945. As the chief of staff of 1st Ukrainian Front, Sokolovsky helped plan and execute the capture of Berlin. Sokolovsky sat next to Zhukov as he accepted the German Instrument of Surrender in Berlin.

After World War II, Sokolovsky became the deputy commander-in-chief of the Soviet Forces in East Germany until July 3, 1946. On that day Sokolovsky was promoted to the rank of Marshal of the Soviet Union, and also made commander-in-chief of the Group of Soviet Forces in Germany and head of the Soviet Military Administration in Germany. His walking out of a meeting of the Allied Control Council on 20 March 1948 as the Soviet representative on that body effectively immobilized it from that date. In 1949 he became the Soviet Union's Deputy Minister of Defense, a position he held until 1952, when he was made the Chief of the General Staff. In 1960 Sokolovsky became the Inspector-General of the Ministry of Defense. He retained this position until his death on May 10, 1968.

Sokolovsky became widely known in the West with the publication in 1962 of Military Strategy, a book that contained rare detail on Soviet thinking about war, particularly nuclear war.

Sokolovsky was a key member of the Soviet war command during World War II and known as an excellent planner and exceptional military leader. He was particularly well-trusted by Marshal Georgy Zhukov. The urn containing Sokolovsky’s ashes is buried in the Kremlin Wall Necropolis.

The contents of this page are sourced from Wikipedia article on 08 Mar 2020. The contents are available under the CC BY-SA 4.0 license.
View Vasily Sokolovsky 's image gallery
Image Gallery