Vanessa Nakate (born November 15, 1996) is a Ugandan climate justice activist. She grew up in Kampala and started her activism in December 2018 after becoming concerned about the unusually high temperatures in her country.

Nakate graduated with a degree in Business Administration in Marketing from Makerere University Business School.

Actions for the climate

Inspired by Greta Thunberg to start her own climate movement in Uganda, Nakate began a solitary strike against inaction on the climate crisis in January 2019. For several months she was the lone protester outside of the gates of the Parliament of Uganda. Eventually, other youth began to respond to her calls on social media for others to help draw attention to the plight of the Congolian rainforests. Nakate founded the Youth for Future Africa and the likewise Africa-based Rise Up Movement.

In December 2019, Nakate was one of a handful of youth activists to speak at the COP25 gathering in Spain.

In early January 2020, she joined around 20 other youth climate activists from around the world to publish a letter to participants at the World Economic Forum in Davos, calling on companies, banks and governments to immediately stop subsidizing fossil fuels. She was one of five international delegates invited by Arctic Basecamp to camp with them in Davos during the World Economic Forum; the delegates later joined a climate march on the last day of the Forum.

In a 2019 interview with Amy Goodman for Democracy Now!, Nakate expressed her motivation for climate action: "My country heavily depends on agriculture, therefore most of the people depend on agriculture. So, if our farms are destroyed by floods, if the farms are destroyed by droughts and crop production is less, that means that the price of food is going to go high. So it will only be the most privileged who will be able to buy food. And they are the biggest emitters in our countries, the ones who will be able to survive the crisis of food, whereas most of the people who live in villages and rural communities, they have trouble getting food because of the high prices. And this leads to starvation and death. Literally, in my county, a lack of rain means starvation and death for the less privileged".

In January 2020, the Associated Press news agency cropped Nakate out from a photo she appeared in featuring Greta Thunberg and activists Luisa Neubauer, Isabelle Axelsson, and Loukina Tille after they all attended the World Economic Forum. Nakate accused the media of a racist attitude. The Associated Press later changed the photo and indicated there was no ill intent, without presenting its apologies. On January 27, 2020, AP executive editor Sally Buzbee tweeted an apology using her personal account saying that she was sorry on behalf of the AP. 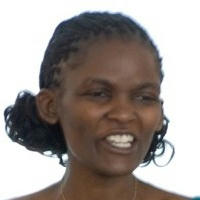