Utkirbek Haydarov (Уткирбек Хайдаров; born January 25, 1974 in Andijon) is an Uzbekistani boxer who competed in the light heavyweight (81 kg) at the 2004 Summer Olympics and won the bronze medal.

The aggressive southpaw won the middleweight world title six years earlier in Houston but lost his first match at the Olympics 2000 and moved up in weight.

He qualified for the 2004 Athens Games by ending up in first place in the 2nd AIBA Asian 2004 Olympic Qualifying Tournament in Karachi, Pakistan. In the final he defeated Turkmenistan's Shokhrat Kurbanov. At light heavyweight he also won the bronze medal at the 2005 World Amateur Boxing Championships in Mianyang, People's Republic of China after having 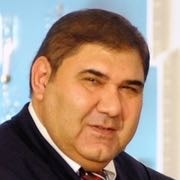