Urmas Sisask (born 9 September 1960 in Rapla) is an Estonian composer.

One of the major inspirations for his music is astronomy. Based on the trajectories of the planets in the solar system, he created the "planetal scale", a mode consisting of the pitches C#, D, F#, G#, and A. Later, he discovered to his surprise that this was exactly the same as the Japanese Kumayoshi mode, which is also known as the Japanese pentatonic scale.

Sisask is a Roman Catholic, and much of what he composes is sacred music. 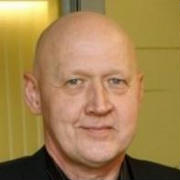