‘Unṣurī is said to have been born in Balkh, today located in Afghanistan, and he eventually became a poet of the royal court of Mahmud of Ghazni, and was given the title Malik-us Shu'ara (King of Poets) under Sultan Maḥmūd of Ghazna.

His Divan is said to have contained 30,000 distichs, of which only 2500 remain today. It includes the romance epic Vāmiq u ‘Adhrā. The following dialog between an eagle and a crow, translated by Iraj Bashiri, is an example. In it the King of Poets, Unsuri, compares his own status vis-a-vis that of a young poet who has joined the court recently.

The Eagle and The Crow: A Dialogue

A dialogue occurred, I happen to know,

Betwixt the white eagle and the crow.

Birds we are, said the crow, in the main,

Friends we are, and thus we shall remain.

Birds we are, agreed the eagle, only in name,

Our temperaments, alas, are not the same.

My leftovers are a king's feast,

Carrion you devour, to say the least.

My perch's the king's arm, his palace my bed,

You haunt the ruins, mingle with the dead.

My color is heavenly, as everyone can tell,

Kings tend to choose me rather than you,

Good attracts good, that goes for evil too. 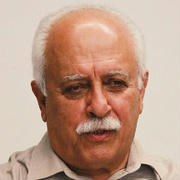