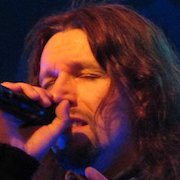 Toni Kristian "Tony" Kakko (born 16 May 1975) is a Finnish musician, composer and vocalist. He is mainly known as the vocalist, primary songwriter, and creative force in the band Sonata Arctica since 1996.

Kakko was born in Kemi, Finland and joined Sonata Arctica in 1996, after studying keyboards for two years and singing informally in local festivals. He assumed both the keyboards and the vocals, but after the release of the band's first album, decided to concentrate on singing with the joining of Mikko Härkin. The bands Queen, Stratovarius, Children of Bodom and Nightwish are amongst his biggest musical influences. Kakko also states the season of winter as one of his influences. His singing style is clean and generally high-pitched. He sings in the tenors range, and has begun to scream on later releases with Sonata, especially The Days of Grays, but also some screams in the background on Unia.

Tony appeared as a guest male vocalist in Nightwish's 2001 remake of their song "Astral Romance", which appeared on the EP Over the Hills and Far Away. He also sang backing vocals on the song "Over the Hills and Far Away" and sang a duet with Tarja Turunen on the live version of "Beauty and the Beast." Tony appears on stage with Tarja performing "Beauty and the Beast," on Nightwish's live DVD From Wishes to Eternity. He performed guest vocals in the song "Wasted Time" from Heavenly's album Virus and did backing vocals for Before the Bleeding Sun, the fifth album of the Finnish band Eternal Tears of Sorrow, and Epica's song White Waters from the album Design Your Universe. More recently, he has been involved with a project Northern Kings, in which he, along with Juha-Pekka Leppäluoto (Charon), Marco Hietala (Tarot, Nightwish) and Jarkko Ahola (Teräsbetoni) sings covers of classics from decades past.

In July 2015, it was announced that Kakko would replace Jukka Nevalainen as Nightwish's special guest at the 2015 edition of Rock in Rio.