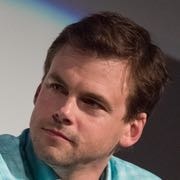 Tommy Dewey (born August 3, 1978) is an American actor, producer, and writer. He co-starred with Michaela Watkins in the Hulu original series Casual.

Dewey was born in Birmingham, Alabama. He went to Mountain Brook High School, and graduated from the Woodrow Wilson School of Public and International Affairs at Princeton University.

Dewey's first television role was in the Amanda Bynes sitcom What I Like About You. One of his breakout roles was playing opposite Mindy Kaling in the first season of the show The Mindy Project, where he played Josh Daniels, a lawyer who was one of the title character's love interests. As of 2015, Dewey co-stars in the Hulu original series Casual.

The contents of this page are sourced from Wikipedia article on 02 Jul 2020. The contents are available under the CC BY-SA 4.0 license.
comments so far.
Comments
Reference sources
References
http://www.glamour.com/entertainment/blogs/obsessed/2015/10/all-the-heartwarming-hilarious
http://ftw.usatoday.com/2015/10/tommy-dewey-leaves-every-alabama-game-early-because-its-a-family-tradition
https://variety.com/2015/scene/vpage/casual-hulu-jason-reitman-michaela-watkins-and-tommy-dewey-1201599889/
https://www.imdb.com/name/nm1204858/
https://twitter.com/TommyDeweySays
Trending today in