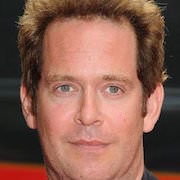 Thomas Anthony Hollander (born 25 August 1967) is an English actor. He began his career in theatre, winning the Ian Charleson Award in 1992 for his performance as Witwoud in The Way of the World at the Lyric Hammersmith Theatre. He is known for his roles in comedic films such as Pirates of the Caribbean and In the Loop and drama films such as Enigma, Pride & Prejudice, Gosford Park and Hanna. He played the lead role in the sitcom Rev., which won the British Academy Television Award for best sitcom in 2011. He also played the lead in the ITV's Doctor Thorne and won the BAFTA Television Award for Best Supporting Actor for his role as Major Lance "Corky" Corkoran in the BBC series The Night Manager.

He appeared as Henry Carr in a revival of Tom Stoppard's play Travesties at the Apollo Theatre in London, directed by Patrick Marber. The play transferred to the West End, with the same cast, after its sell-out run at the Menier Chocolate Factory (September to 19 November 2016) and ran until 29 April 2017. Hollander was nominated for an Olivier Award for Best actor for his role in Travesties and the production as a whole was nominated in five categories (Best actor, Best revival, Best sound design, Best actress in a supporting role and Best actor in a supporting role). Patrick Marber's revival will transfer to Broadway in 2018, with Hollander reprising his leading role as Carr. The play will open on 24 April 2018 (previews 29 March) at the Roundabout Theatre Company's American Airlines Theater in New York. He plays Dr. Sorgh in the film Tulip Fever which was released in September 2017. The screenplay, also by Stoppard, is an adaptation of Deborah Moggach's historical novel. He also appears as Garin in Terry George's historical drama The Promise, his third collaboration with George who also directed him in Some Mother's Son and Whole Lotta Sole.

In January 2016, he became an Honorary Fellow of Selwyn College, Cambridge (his former college).

Hollander was born in Bristol, the son of teachers, and was raised in Oxford. His father is descended from Czech Jews who converted to Catholicism and his mother is of English background. He attended the Dragon School and then Abingdon School, where he was chief chorister. As a youngster, he was a member of the National Youth Theatre and the National Youth Music Theatre (then known as the Children's Music Theatre). In 1981, at the age of 14, he won the lead role in a BBC dramatisation of Leon Garfield's John Diamond.

Hollander read English at Selwyn College, Cambridge. He was actively involved in stage productions as a member of the Footlights and was president of the Marlowe Society. Sam Mendes, a friend and fellow student, directed him in several plays while they were at Cambridge, including a critically acclaimed production of Cyrano de Bergerac (which also featured future Deputy Prime Minister Nick Clegg).

Hollander's film and television appearances include Absolutely Fabulous, Martha, Meet Frank, Daniel and Laurence, Wives and Daughters, Harry, Cambridge Spies for which he received the FIPA D'OR Grand prize for best actor, Gosford Park, The Lost Prince and Pride & Prejudice for which he received the Evening Standard Film Awards Comedy Award, and London Critics Circle Best Supporting Actor. He has worked repeatedly with Michael Gambon and Bill Nighy and is a good friend of James Purefoy. Although highly respected as a character actor and the recipient of several awards, many of his films will still play on his height (5' 5" / 165 cm). Hollander has created several memorable comedic characters that draw more on his physical energy and intensity than his height, such as the "brilliantly foul-mouthed" Leon in BBC Two's Freezing, described in The Times as a "braying swirl of ego and mania".

Hollander portrayed Lord Cutler Beckett, the "heavy" in Pirates of the Caribbean: Dead Man's Chest and Pirates of the Caribbean: At World's End. He also appeared in the TNT miniseries The Company as Kim Philby, having previously played Guy Burgess in the BBC's Cambridge Spies. He returned to the stage in 2007 with the premiere of Joe Penhall's play Landscape with Weapon at the Royal National Theatre. In 2008 he made a notable cameo appearance as King George III in the HBO mini-series John Adams, and ended the year as a memorable Colonel Heinz Brandt in Valkyrie.

In 2009, Hollander played a symphonic cellist in Joe Wright's movie The Soloist, his second film with Wright, who cast him to great effect as the fevered suitor Mr. Collins in 2005's Pride and Prejudice. He has worked once more with Wright, portraying a memorably flamboyant and menacing villain in Hanna (2011). Hollander appeared in a lead role in Armando Iannucci's In the Loop as Secretary of State for International Development Simon Foster MP. Hollander later made a surprise appearance (in a different role) at the end of the third series of The Thick of It, the programme on which In the Loop was based.

In 2010, Hollander and writer James Wood co-created the TV series Rev., a sensitive comedy about the all-too-human vicar of an inner-city parish. Reviews called it intelligent, realistic and very funny. Hollander played the sympathetic title character, Rev. Adam Smallbone. The show won a BAFTA in 2011 for Best Situation Comedy, among other awards and recognition. A second series aired in the UK on BBC 2 in 2011 and a third series in 2014. He has been praised for his role as the "inebriated and endearing, menacing and beguiling" chemist, Dr George Cholmondeley, appearing in five episodes of the BBC / FX 2017 series Taboo with one commenter describing him as "giving a masterclass on how to create dimension and personality, even with limited screen time."

Hollander won the 1992 Ian Charleson Award for his performance as Witwoud in The Way of the World at the Lyric Hammersmith Theatre. He had been nominated and commended the previous year for his Celia in an all-male production of As You Like It for Cheek by Jowl and was again nominated and commended for his Khlestakov in The Government Inspector at the Almeida Theatre in 1997. He had also received a special commendation for his 1996 performance of the title role in Tartuffe at the Almeida Theatre. In all, Hollander has been the most frequent Ian Charleson Award honoree, with four appearances at the awards: one win, two commendations and one special commendation.

In 2010, Hollander returned to the live stage in a demanding comedic dual role in Georges Feydeau's A Flea in Her Ear at the Old Vic. Playing both master and servant with "lightning physical precision and shockingly true confusion", Hollander's was called "a virtuoso performance". Between September and November 2016 he starred as (a "career-best") Henry Carr in Patrick Marber's "superb revival" of Tom Stoppard's Travesties at the Menier Chocolate Factory, the play (with the same cast) transferred to the Apollo Theatre in February 2017 and has been nominated for five Olivier Awards including Best actor (Tom Hollander) and Best revival (Travesties).

Hollander has lent his vocal talents to a number of roles for BBC radio including Mosca in 2004's Volpone for Radio 3, Frank Churchill in Jane Austen's Emma and as Mr Gently Benevolent in the pilot of the Dickensian parody Bleak Expectations for Radio 4, although he did not take part in the full series. He has voiced a young Joseph Merrick, the "Elephant Man", a disembodied head named Enzio in an urban gothic comedy and Leon Theremin, the Russian inventor famous for the electronic instrument that bears his name. He provided the vocal texture for Anthony Burgess' A Clockwork Orange recently with a "smooth, almost lyrical, crisp voice" that accomplished the task of rendering the extensive and unique slang of the book instantly understandable to readers. More recent readings include "The Casual Vacancy" by J.K. Rowling. In 2015 (repeated in April 2017) he played Patrick Moore in the BBC radio play 'Far side of the Moore' about the astronomer and his Sky at Night TV programme. In May 2016 he portrayed Geoff Cathcart in Andy Mulligan's four-part play School Drama on BBC Radio 4 which was chosen by The Guardian as that week's best radio and he narrated Peter Bradshaw's short story Reunion, broadcast on Radio 4 in October 2016. He has also portrayed the Russian artist Kazimir Malevich in Margy Kinmonth's documentary Revolution: New Art for a New World due for release in the UK and Ireland in November 2016.

Since 2008, he has written an occasional diary-style column for The Spectator.

Hollander has contributed his running and cycling efforts to several charitable causes, including running to raise funds for the Childline Crisis Hotline in 2006 and in 2007, for the Teenage Cancer Trust. He is a long-time supporter of the Helen & Douglas House Hospice for Children and Young Adults in Oxford, which provides hospice care for children. He continues to support charitable organisations by contributing readings and other appearances throughout the year.

Hollander is a patron of the British Independent Film Awards and has supported the efforts of the Old Vic's "24 Hour Plays New Voices" Gala, which forwards the cause of young writers for the British stage. In August 2014, he was one of 200 public figures who were signatories to a letter to The Guardian opposing Scottish independence in the run-up to September's referendum on that issue.