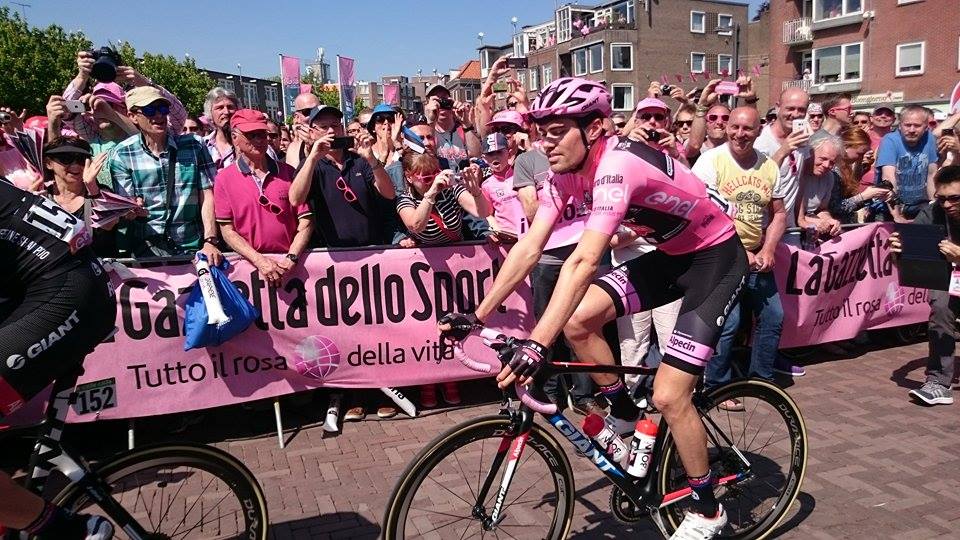 Dumoulin was born in Maastricht, and grew up in the city near the Maas Boulevard, which used to host the finish of the Amstel Gold Race. Originally his ambition was to study medicine and become a doctor, however after not being offered a place at medical school he opted to pursue cycle racing for a year. He first made an impact in 2010, when he competed at the Grand Prix of Portugal, part of the UCI Under 23 Nations' Cup – Dumoulin won the race's opening time trial, despite never having ridden a time trial bicycle before, and went on to win the race overall. Later that year he won a time trial stage of the Girobio. He was due to ride for Cervélo TestTeam in 2011, however the team disbanded at the end of the 2010 season.

Dumoulin at the 2013 Tour de France

After riding for the Rabobank Development Team in 2011, Dumoulin turned professional with the Dutch Project 1t4i team in 2012.

In June 2014 Dumoulin won the Dutch National Time Trial Championships. In September 2014 he came in second place at the Grand Prix Cycliste de Québec after surging ahead on the last climb but being passed by Simon Gerrans. Later that month he took a bronze medal in the UCI World Time Trial Championships, placing third behind Bradley Wiggins and Tony Martin in Ponferrada.

He started the 2015 season by finishing fourth overall at the Tour Down Under. He took his first success of the season by winning the final individual time trial on the Tour of the Basque Country. His second victory of the year came at the Tour de Suisse, where he won the prologue with a two seconds advantage over Fabian Cancellara. He also won the closing stage of that race, a 38.4 km (23.9 mi) time trial he covered at an average 47.407 km/h (29.5 mph).

In the Tour de France, Dumoulin was one of the favourites to take victory in the opening time trial on home soil in Utrecht, the Netherlands, but ultimately finished fourth. On stage 3, he was involved in a massive, high-speed crash and had to abandon the race. Dumoulin recovered from his injuries to ride the 2015 Vuelta a España. On Stage 2, he attacked on the final climb to Caminito del Rey and formed a group with Nicolas Roche (Team Sky) and Nairo Quintana (Movistar Team), but was caught and passed by Esteban Chaves (Orica–GreenEDGE), who won the Stage ahead of Dumoulin in second. On Stage 5 there was a split in the peloton, and Chaves lost six seconds to Dumoulin, who took the race lead by 1 second. However, Chaves won Stage 6 ahead of Dumoulin in third to re-take the Red Jersey. Stage 9 was another first-category summit finish. There was a series of attacks on the early part of the climb, with many riders dropped from the lead group. Dumoulin eventually took a solo win in the stage, two seconds ahead of Chris Froome (Team Sky) and took back the red jersey as Chaves lost significant time. Froome had originally been dropped, but rode at a steady tempo and came close to winning the stage before Dumoulin outsprinted him in the final hundred metres. After Froome crashed out on Stage 11, Dumoulin limited his losses on the following mountain stages, as Fabio Aru (Astana) and Joaquim Rodríguez (Team Katusha) traded the race lead. On Stage 17, Dumoulin won the 38.1 km individual time trial. He gained 1 minute and 53 seconds on Aru to take the Red Jersey by three seconds over Aru, with Rodriguez now 1 minute and 15 seconds back in third overall after losing over 3 minutes to Dumoulin on the stage. Dumoulin doubled his lead over Aru by gaining three seconds through an attack on Stage 19's final cobbled climb, however he lost the race to Aru on Stage 20, the Vuelta's last mountain stage, where Aru distanced Dumoulin on the third of the stage's four Category 1 climbs. Dumoulin lost almost four minutes to Aru and slipped down to sixth place in the general classification. In December 2015, he won the Gerrit Schulte Trophy, the award for the best Dutch of cyclist of the year.

Dumoulin wearing the maglia rosa of general classification leader, at the 2016 Giro d'Italia

He was named in the start list for the 2016 Giro d'Italia, where he won the opening time trial on home soil in Apeldoorn, the Netherlands, to take the maglia rosa. On Stage 8, Dumoulin lost the race lead after finishing 38th and losing 1 minute and 10 seconds to Alejandro Valverde (Movistar Team) in a hilly stage with portions of strade bianche during the stage. He abandoned the race on stage 11.

Dumoulin also rode the 2016 Tour de France. He won Stage 9 after attacking from a breakaway on the lower slopes of Andorre Arcalis, and riding up the climb solo in torrential rain. Dumoulin also won Stage 13, a 37.5 km (23.3 mi) time trial over hilly terrain in windy conditions, by a margin of over a minute to Chris Froome in second place.