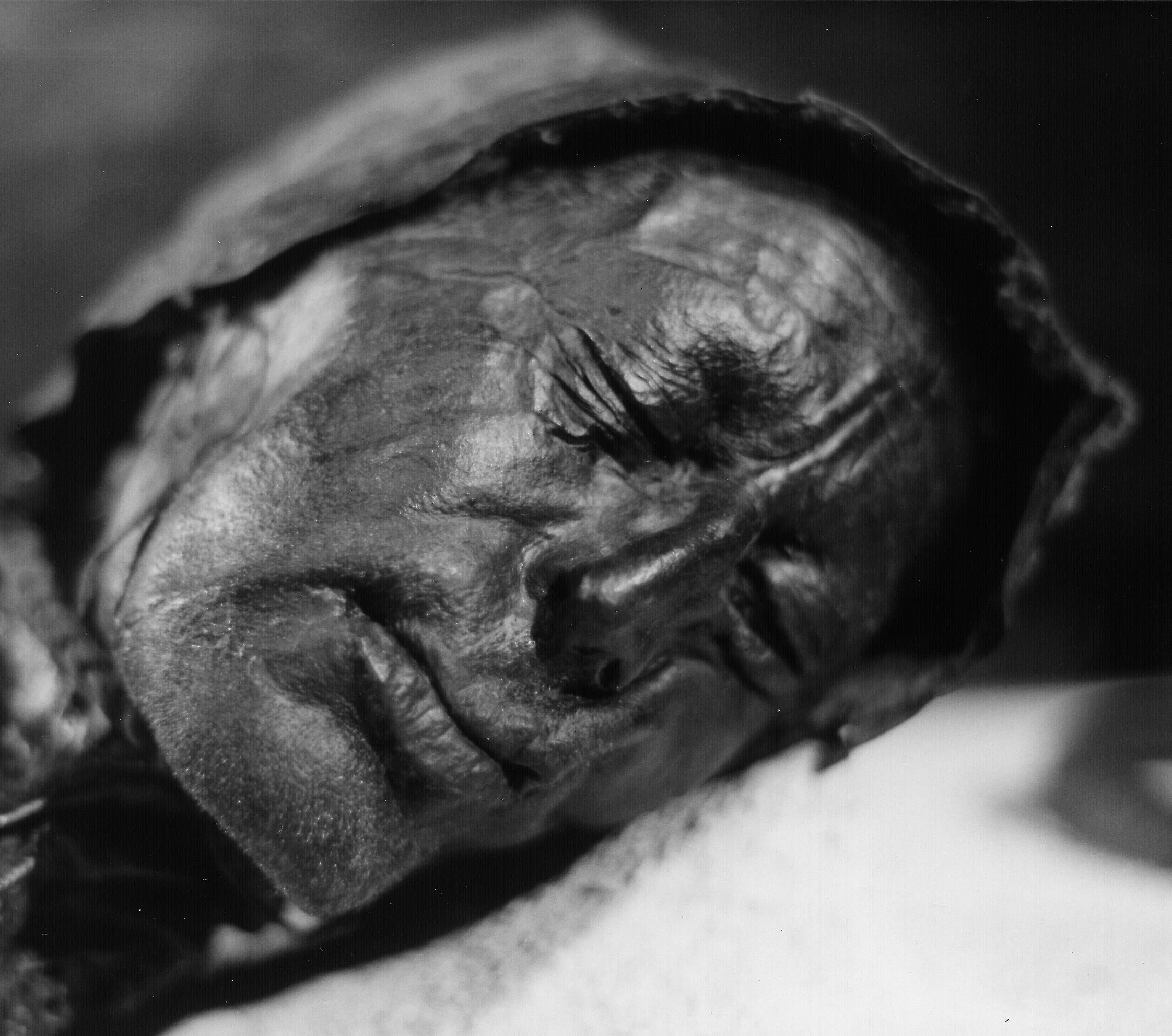 Tollund Man is a naturally mummified corpse of a man who lived during the 4th century BC, during the period characterised in Scandinavia as the Pre-Roman Iron Age. He was found in 1950 on the Jutland Peninsula in Denmark, buried in a peat bog which preserved his body. Such a find is known as a bog body. The man's physical features were so well-preserved that he was mistaken at the time of discovery for a recent murder victim. Twelve years before Tollund Man's discovery, another bog body, Elling Woman, had been found in the same bog. The remains of Tollund Man shortly after his discovery

On 6 May 1950, brothers Viggo and Emil from the small village of Tollund on the Jutland peninsula were cutting peat in the Bjældskovdal peat bog, 12 kilometres (7.5 mi) west of Silkeborg, Denmark. As they worked, one of their wives, who was helping to load the peat on a carriage, noticed a corpse in the peat layer. It appeared so fresh that the workers believed they had discovered a recent murder victim. After much deliberation, the woman notified the police in Silkeborg. The find was reported to the police on Tuesday 8 May 1950. They were baffled by the condition of the body and, in an attempt to identify the time of death, they brought in archaeology professor P. V. Glob. Upon initial examination, Glob suggested that the body was over 2,000 years old and most likely the victim of a ritual sacrifice.

The Tollund Man lay 50 metres (160 ft) away from firm ground, buried under approximately 2 metres (6.6 ft) of peat, his body arranged in a fetal position. He wore a pointed skin cap made of sheepskin and wool, fastened securely under his chin by a hide thong. There was a smooth hide belt around his waist. Additionally, the corpse had a noose made of plaited animal hide drawn tight around the neck and trailing down his back. Other than these, the body was naked. His hair was cropped so short as to be almost entirely hidden by his cap. There was short stubble (1 mm length) on his chin and upper lip, suggesting that he had not shaved on the day of his death.

Scholars believe the man was a human sacrifice rather than executed criminal because of the arranged position of his body, and the fact that his eyes and mouth were closed. C14 radiocarbon dating of Tollund Man indicated that he died in approximately 375–210 BC. The preserved tender soft tissues of his body are the consequence of the acid in the peat, along with the lack of oxygen underneath the surface and the cold climate of the Nordic countries. The acid in the peat, needed for the preservation of a human body is caused by a bryophyte named Sphagnum. Sphagnum fight against degradation due to resistant phenolic compounds contained in their cell walls. Due to the acidity of peat, bones are typically dissolved rather than preserved.

Examinations and X-rays showed that the man's head was undamaged, and his heart, lungs and liver were well preserved. The Silkeborg Museum estimated his age as approximately 40 years and height at 1.61 metres (5 ft 3 in), a relatively short stature even for the time. It is likely that the body had shrunk in the bog.

On the initial autopsy report in 1950, doctors concluded that Tollund Man died by hanging rather than strangulation. The rope left visible furrows in the skin beneath his chin and at the sides of his neck. There was no mark, however, at the back of the neck where the knot of the noose would have been located. After a re-examination in 2002, forensic scientists found further evidence to support these initial findings. Although the cervical vertebrae were undamaged (these vertebrae are often damaged as a result of hanging), radiography showed that the tongue was distended—an indication of death by hanging.

The stomach and intestines were examined and tests carried out on their contents. Scientists identified the man's last meal as porridge or gruel made from grains and seeds, both cultivated and wild. Approximately 40 kinds of seeds were identified, but the porridge was primarily composed of four types: barley, flax, false flax (Camelina sativa) and knotgrass. From the stage of digestion it was concluded that the man had eaten 12 to 24 hours prior to his death. Porridges were common for people of this time. Because neither meat nor fresh fruit was found in the last meal, it is suggested that the meal was eaten in winter or early spring when these items were not available.

Both feet and the right thumb, being well conserved by the peat, were also preserved in formalin for later examination. In 1976, the Danish police made a fingerprint analysis, making Tollund Man's thumbprint one of the oldest prints on record.

The body is displayed at the Silkeborg Museum in Denmark, although only the head is original. Because conservation techniques for organic material were insufficiently advanced in the early 1950s for the entire body to be preserved, the forensic examiners suggested the head be severed and the rest of the body remain unpreserved. Subsequently, the body desiccated and the tissue disappeared. In 1987, the Silkeborg Museum reconstructed the body using the skeletal remains as a base. As displayed today, the original head is attached to a replica of the body.

In Denmark, more than 500 bog bodies and skeletal remains dating to the Iron Age have been recovered. Specimens from Jutland include the relatively well-preserved Borremose bodies, Huldremose Woman, Grauballe Man on display at Moesgård Museum near Aarhus, and the similarly conserved Haraldskær Woman. Approximately 30 of these bog bodies are housed and/or displayed in Danish museums for continued research.

Nobel Prize–winning Irish poet Seamus Heaney wrote a series of poems inspired by P.V. Glob's study of the mummified Iron Age bodies found in Jutland's peat bogs, finding contemporary political relevance in the relics of the ritualistic killings. Heany's poem The Tollund Man, published in his Wintering Out collection, compares the ritual sacrifice to those who died in the sectarian violence of "the Troubles." Heaney wrote an excerpt from the poem in the Tollund Man exhibit's guest book in 1973.

British author Margaret Drabble, in her 1989 novel, A Natural Curiosity, uses her characters' obsession with the Tollund Man to provide a satirical criticism of Margaret Thatcher's modern England.

Tollund Man is featured in separate songs: Tollund Man (1995) by the American folk band The Mountain Goats and Curse of the Tollund Man (2004) by the English rock band The Darkness.

Tollund Man was mentioned in the episode "Mummy in the Maze" of the television series Bones.