He studied vocals at the pop/jazz conservatory in Helsinki, briefly singing for an amateur cover band named Filthy Asses. In summer of 1994, he applied to Stratovarius, who were looking for a singer at the time, and was accepted. His arrival corresponds closely with the band's rise to international fame. The first album he recorded with the band was Fourth Dimension, in 1995. Stratovarius has then become a top name in the European heavy metal scene, recording seven more albums and performing in numerous notable rock festivals.

In late 2003, Kotipelto split from Stratovarius after intra-band disagreements, notably with guitarist Timo Tolkki. After much turmoil throughout 2004, he rejoined the band in January 2005, recorded the album Stratovarius, and performed live on tour that covered North America, South America, Europe and Asia. In 2008, Timo Tolkki made public that he and Timo Kotipelto had arguments but Koltipelto never really left the band and the announcement that he left was part of a big publicity stunt.

In 2002 Kotipelto started his solo project, called Kotipelto. So far he has released three albums: "Waiting For The Dawn", "Coldness" and the last one, released 20 April 2007, "Serenity". Aside from Stratovarius and Kotipelto, Timo Kotipelto has also provided additional vocals to Sonata Arctica's Silence album along with lead vocals with his close friend, ex-Sonata Arctica guitarist Jani Liimatainen and his band Cain's Offering. and lead vocals for the song "Out of the White Hole", on Ayreon's 2000 release Universal Migrator Part 2: Flight of the Migrator.

Kotipelto also provided vocals for the track "Eye of the Storm" on Warmen's 2009 album Japanese Hospitality. 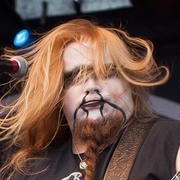