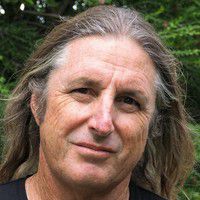 Timothy John Winton (born 4 August 1960) is an Australian writer of novels, children's books, non-fiction books, and short stories. In 1997 he was named a Living Treasure by the National Trust, and has won the Miles Franklin Award four times.

Tim Winton was born in Subiaco, Western Australia and grew up in Karrinyup, at that time an outer northern suburb of Perth, Western Australia. He moved with his family at the age of 12 to the regional city of Albany.

Winton has been named a Living Treasure by the National Trust and awarded the Centenary Medal for service to literature and the community. He is patron of the Tim Winton Award for Young Writers sponsored by the City of Subiaco, Western Australia.

He has lived in Italy, France, Ireland and Greece but currently lives in Western Australia again. Winton met his wife Denise when they were children at school. When he was 18 and recovering from a car accident, they reconnected as she was a student nurse. They married when he was 21 and she was 20. They have three children together. They live on the coast north of Perth.

His younger brother, Andrew Winton, is a musician and a high school chaplain. His younger sister is Sharyn O'Neill, who in 2007 assumed the position of Director General of the WA Education Department.

As his fame has increased Winton has guarded his and his family's privacy. He rarely speaks in public yet he is known as "an affable, plain-speaking man of unaffected intelligence and deep emotions."

Whilst at Curtin University of Technology, Winton wrote his first novel, An Open Swimmer, which won The Australian/Vogel Literary Award in 1981, launching his writing career. He has stated that he wrote "the best part of three books while at university". His second book, Shallows, won the Miles Franklin Award in 1984. It wasn't until Cloudstreet was published in 1991, however, that his writing career was properly established. He has continued to publish fiction, plays and non-fiction material.

In 1995, Winton’s The Riders was shortlisted for the Man Booker Prize for Fiction, as was his 2002 book, Dirt Music. Both are currently being adapted for film. He has won many other prizes, including the Miles Franklin Award a record four times: for Shallows (1984), Cloudstreet (1992), Dirt Music (2002) and Breath (2009). Cloudstreet regularly appears in lists of Australia's best-loved novels.

All his books are still in print and have been published in eighteen different languages. His work has also been successfully adapted for stage, screen and radio. On the publication of his novel, Dirt Music, he collaborated with broadcaster Lucky Oceans to produce a compilation CD, Dirt Music – Music for a Novel.

The Tim Winton Young Writers Award, sponsored annually since 1993 by the City of Subiaco, recognizes young writers in the Perth metropolitan area. It is open to short story writers of primary school and secondary school age. Three compilations have been published: Destination Unknown (2001) Life Bytes (2002), and Hatched: Celebrating Twenty Years of the Tim Winton Award for Young Writers (2013). The latter features the winning story from each year of the award from 1993 to 2012. Winton is the patron of the competition.

Curtin University has named a lecture theatre in honour of Tim Winton.

Winton draws his prime inspiration from landscape and place, mostly coastal Western Australia. He has said "The place comes first. If the place isn't interesting to me then I can't feel it. I can't feel any people in it. I can't feel what the people are on about or likely to get up to." His themes often centre on an issue from young adulthood. As character Gail says in The Turning, "every vivid experience comes from your adolescence".

"Winton is widely recognised for his depiction of Australians and the land where they live. A keen environmentalist, Winton's love of this land is reflected in the way he uses landscapes and places for inspiration. Many of his stories are set in Western Australia."

Dr Jules Smith for the British Council wrote about Winton,

"His books are boisterous and lyrical by turns, warm-hearted in their depictions of family life but with characters that often have to be in extremis in order to find themselves. They have a wonderful feeling for the strange beauty of Australia; are frequently flavoured with Aussie vernacular expressions, and a good deal of emotional directness. They question macho role models (his books are full of strong women and troubled men) and are prepared to risk their realist credibility with enigmatic, even visionary endings."

Winton revisits place and, occasionally, characters from one book to another. Queenie Cookson, for example, is a character in Breath who also appears in Shallows, Minimum of Two and in two of the Lockie Leonard books.

"I never had a desire for a public life, never expected to be read by more than a couple of thousand people, and when you get the mass audience I seem to have stumbled upon, the public exposure is very disconcerting ... There's an uneasy encounter between art and commerce which I don't know personally how to resolve ... writing is ... something I do for myself and because I can" ... magic moments "when it's happening, when you finally get pen to paper, you exist only in that present tense - you don't have an age, a heartbeat, you're just in this squeezed-down narrow focus which is timeless."

Winton is actively involved in the Australian environmental movement. He is a patron of the Australian Marine Conservation Society (AMCS) and is involved in many of their campaigns, notably their work in raising awareness about sustainable seafood consumption. He is a patron of the Stop the Toad Foundation and contributed to the whaling debate with an article on the Last Whale website. He is also a prominent advocate of the Save Moreton Bay organisation, the Environment Defender’s Office, the Australian Wildlife Conservancy and the Marine Conservation Society, with which he is campaigning against shark finning.

In 2003, Winton was awarded the inaugural Australian Society of Authors (ASA) Medal in recognition for his work in the campaign to save the Ningaloo Reef.

Winton keeps away from the public eye, unless promoting a new book or supporting an environmental issue. He told reviewer Jason Steger "Occasionally they wheel me out for green advocacy stuff but that's the only kind of stuff I put my head up for."

In 2016, species of fish from the Kimberley region was named after him.

In March 2017 Winton was named patron of the newly-established Native Australian Animals Trust. He has always featured the environment and the Australian landscape in his writings. The trust was established to help research and teaching about native animals and their environment. Associate Professor Tim Dempster, School of Biosciences is quoted as saying, "Australia has a unique and charismatic animal fauna, but our state of knowledge about it is poor. Indeed species can go extinct before we even know of their existence. We have much to learn from our fauna, and a pressing need to do so."

Scission and Other Stories

Minimum of Two and Other Stories

The Boy Behind the Curtain