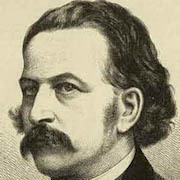 Theodor Fontane ([ˈtʰeːodoɐ̯ fɔnˈtaːnə]; 30 December 1819 – 20 September 1898) was a German novelist and poet, regarded by many as the most important 19th-century German-language realist author. He published the first of his novels, for which he is best known today, only at age 58 after a career as a journalist.

Fontane's novels are known for their complex, often sceptical view of society in the German empire; he shows different social and political parts of society meeting and sometimes clashing. Other trademarks of Fontane's work are their strongly drawn female characters (such as Effi Briest and Frau Jenny Treibel), tender irony and vivid conversations between characters.

Fontane was born in Neuruppin, a town 30 miles northwest of Berlin, into a Huguenot family. At the age of sixteen he was apprenticed to an apothecary, his father's profession. He became an apothecary himself and in 1839, at the age of 20, wrote his first work (Heinrichs IV. erste Liebe, now lost). His further education was in Leipzig, where he became acquainted with the progressives of the Vormärz.

Fontane's first published work, the novella Geschwisterliebe (Sibling Love), was published in the Berlin Figaro in December 1839. His biographer Gordon A. Craig claims that this gave few indications of being a gifted writer: "Although the theme of incest, which was to occupy Fontane on later occasions, is touched upon here, the mawkishness of the tale... is equalled by the lameness of its plot and the inertness of the style in which it is told, and [the characters] Clärchen and her brother are both so colourless that no one could have guessed that their creator had a future as a writer."

Fontane's first job as apothecary was in Dresden, after which he worked in his father's shop in the town of Letschin in the Oderbruch region. Fleeing its provincialism, Fontane published articles in the Leipzig newspaper Die Eisenbahn and translated Shakespeare. In 1843 he joined a literary club in Berlin named Tunnel über der Spree (Tunnel over the River Spree) where he became acquainted with many of the most renowned German writers, including Theodor Storm, Joseph von Eichendorff and Gottfried Keller.

In 1844 Fontane enlisted in the Prussian army and began the first of numerous journeys to England, which fostered his interest in Old English ballads, which he – a lifelong anglophile – began to imitate. In 1845 became engaged to his future wife, Emilie Rouanet-Kummer, whom he had met when still at school.

Fontane played a brief part in the revolutionary events of 1848. In 1849 he left his job as an apothecary and became a full-time journalist and writer. In order to provide for his family he accepted a job as a writer with the Prussian intelligence agency Zentralstelle für Presseangelegenheiten, which was intended to influence the press towards the German nationalist cause. There he specialized in British affairs, and the agency made him for several years its correspondent in London, where he was later joined by Emilie, whom he had married in 1850, and their first two sons. While still in London he left his government job and on his return to Berlin became editor of the conservative newspaper Neue Preussische Zeitung. As a man of liberal sympathies for free press and a united Germany Fontane ruefully wrote to a friend about his job with the Zeitung: "I sold myself to the reaction for thirty pieces of silver a month... These days one cannot survive as an honest man."

Fontane's travel books about Britain include Ein Sommer in London (A Summer in London, 1854), Aus England, Studien und Briefe (From England: Studies and Letters, 1860) and Jenseit des Tweed, Bilder und Briefe aus Schottland (Beside the Tweed, Pictures and Letters from Scotland, 1860). In the books Fontane reflects both nature and the mood in Britain at that time. The success of the historical novels of Walter Scott had helped to make British themes much in vogue on the Continent. Fontane's Gedichte (Poems, 1851) and ballads Männer und Helden (Men and Heroes, 1860) tell of Britain's former glories. Back in Germany Fontane became particularly interested in his home province, the March of Brandenburg. He enjoyed rambling through its rural landscapes and small towns and delighted in the growth of its capital city, Berlin. His fascination with the countryside surrounding Berlin may be seen in his picturesque Wanderungen durch die Mark Brandenburg (Walks through the Province of Brandenburg, 1862–82, 5 vols), in which he extended his earlier fascination with British history to his native land.

In 1870 Fontane quit his job at the Kreuzzeitung and became drama critic for the liberal Vossische Zeitung, a job he held until his retirement. He had already written about Prussia's war against Denmark in Der schleswig-holsteinische Krieg im Jahre 1864 (1866) and the Austro-Prussian War in Der deutsche Krieg von 1866 (1869). He went to the front to observe the Franco-Prussian War in 1870 and after being taken prisoner at Vaucouleurs remained in French captivity for three months. He memorialized his experiences in Kriegsgefangen Erlebtes 1870 (Experiences as a Prisoner of War, 1871) and published his observations concerning the campaign in the book Der Krieg gegen Frankreich 1870–71 (The War against France, 1870–71, published 1874–76). In his observations he strongly criticized Prussian militarism: "A mere glorification of the military without moral content or elevated aim is nauseating."

At the age of 57 Fontane finally began work on his novels, for which he is remembered best today. Fontane's lifelong wish to be able to live from his literary works was finally fulfilled. A fine historical romance, Vor dem Sturm (Before the Storm, 1878), was followed by a series exploring modern life, notably L'Adultera (Woman Taken In Adultery, 1882), which was the first of his society novels and deemed risky for its theme of adultery.

His novels Irrungen, Wirrungen (Trials and Tribulations, 1888), Frau Jenny Treibel (1892) and Effi Briest (1894–95) yielded insights into the lives of the nobility and the commoners. His achievement in this regard was later described as poetic realism. In Der Stechlin (written 1895–97), his last completed novel, Fontane adapted the realistic methods and social criticism of contemporary French fiction to the conditions of Prussian life.

Fontane was plagued by health problems during his last years but continued to work until a few hours before his death. He died in the evening of 20 September 1898 in Berlin. As a member of the French Protestant Church of Berlin he was buried in the congregation's cemetery on the Liesenstraße. His wife, Emilie, was buried beside him four years later. Their graves were damaged during World War II but later restored.

The contents of this page are sourced from Wikipedia article on 09 Mar 2020. The contents are available under the CC BY-SA 4.0 license.
View Theodor Fontane 's image gallery
Image Gallery