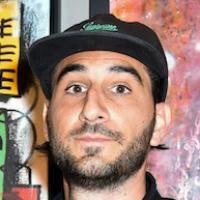 Bryan Avila also known as The Producer BDB was born in Riverside California, he currently lives and works out the city of Los Angeles.

He is an emergent contemporary artist who has lived all over the world. His work is born out of street art with hints of fashion, pop culture, music, technology and history.

In his artworks one can find characters such as Frida Kahlo, Andy Warhol, Karl Lagerfeld, Anna Wintour, Hillary Clinton, John Lennon and countless others. He often collaborates with other artist such as Flore (Artist), Chris Brown and Karen Bystedt.

The early stages of his career where marked by a series of mural works. He traveled around the globe and created murals on the cities of Paris, Madrid, Rio de Janeiro, Miami, Berlin and Los Angeles. After dabbling into fashion and design, he realized that his true passion lies in fine art. Thus he began to blend his interest into fine art representation.

The contents of this page are sourced from Wikipedia article. The contents are available under the CC BY-SA 4.0 license.
View The Producer BDB 's image gallery
Image Gallery