Thanin Kraivichien (first name also spelled Tanin, last name Kraivixien or Kraivichian; Thai: ธานินทร์ กรัยวิเชียร, Thanin Kraiwichian, [tʰaː.nin krai.wí.t͡ɕʰian]; born 5 April 1927) is a Thai former judge, politician and law professor. He was the prime minister of Thailand between 1976 and 1977. Subsequently, he was a member of the Privy Council until 2016.

Thanin is a son of Hae and Pa-ob Kraivichien. He was born in Bangkok. His father was a Chinese-born merchant and owner of one of the biggest pawnshops in Bangkok. Thanin studied law at Thammasat University, graduating in 1948. He then went to the London School of Economics to continue with his law studies. He graduated in 1953, and in 1958 was called to the Bar at Gray's Inn.

In Britain, he met Karen Anderson, a native of Denmark, whom he married. They have five children.

After he returned to Thailand in 1954, Thanin worked in the ministry of justice, becoming an associate judge. He rose quickly, finally becoming President of the Supreme Court of Thailand. Additionally, he taught law at Thammasat and Chulalongkorn universities and the Thai Bar Association. As an avocation, he published books that warned of the dangers of communism.

After the democratic uprising against military dictatorship in 1973, Thanin was a member of the transitional legislative assembly appointed by the king. He became a member of the far-right anti-communist Nawaphon movement. He had a TV show in which he attacked communism, the students' movement, and progressive politicians.

After the Thammasat University massacre of 6 October 1976, the democratically elected prime minister Seni Pramoj was toppled by a military coup led by Admiral Sangad Chaloryu. Two days later, King Bhumibol Adulyadej appointed his favourite, Thanin, to be interim prime minister. Thanin insisted on selecting his cabinet himself and rejected most of the military junta's nominations. The military occupied only the positions of deputy prime minister and deputy minister of defence. Thanin led the first Thai cabinet in which women, Wimolsiri Chamnarnvej and Lursakdi Sampatisiri, held ministerial posts. Thanin was seen as honest and intelligent but also eminently ideological and politically extreme. After his taking office, he sent police special forces to notoriously liberal book shops, and ordered the confiscation and burning of 45,000 books, including works of Thomas More, George Orwell, and Maxim Gorky.

Thanin announced that Thailand could return to democratic rule only after 12 years. The parliament was dissolved and all political parties outlawed. Thanin's crackdown on trade unions, progressive students' and farmers' associations drove activists into the underground structures of the Communist Party of Thailand. Instead of weakening the communists, it fuelled their armed struggle against the government. In March 1977, a group of younger army officers known as the "Young Turks", who had an interest in political matters, tried to topple Thanin. Their attempted coup failed. On 20 October 1977, however, Admiral Sangad again seized power and pressed Thanin to resign. The military justified their intervention because Thanin's government had divided the country and had virtually no public support, the economic situation had worsened, and people in general disagreed with such a long-term suspension of democracy.

The contents of this page are sourced from Wikipedia article on 09 Mar 2020. The contents are available under the CC BY-SA 4.0 license.
View Thanin Kraiwichian 's image gallery
Image Gallery 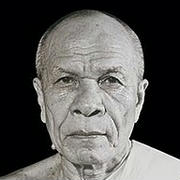