Tania León (born May 14, 1943) is a Cuban-born composer and conductor who is also an educator and advisor to arts organizations.

She was born Tania Justina León in Havana, Cuba, of mixed French, Spanish, Chinese, African, and Cuban heritage. She began studying the piano at the age of four and she attended Carlos Alfredo Peyrellade Conservatory, where she earned a B.A. in 1963, and the Alejandro García Caturla Conservatory, where she studied piano with Zenaida Manfugás. In 1967 she settled in New York City, continuing her studies at New York University under the tutelage of Ursula Mamlok (B.S., 1971; M.S., 1975).

In 1969 León became a founding member and the first musical director of Arthur Mitchell's Dance Theater of Harlem, establishing its music department, music school, and orchestra. Her ballet compositions for that company include Haiku (1973), Dougla (with Geoffrey Holder, 1974) and Belé (with Geoffrey Holder; 1981).

She has been guest conductor with the Beethovenhalle Orchestra, Bonn, the Gewandhausorchester, Leipzig, the Santa Cecilia Orchestra, Rome, the National Symphony Orchestra of South Africa, Johannesburg, the Netherlands Wind Ensemble, the Netherlands, and the New York Philharmonic, among others.

León's opera Scourge of Hyacinths, based on a radio play by Nobel Prize-winner Wole Soyinka, was commissioned in 1994 by the Munich Biennale, where it won the BMW Prize as best new opera. Staged and designed by Robert Wilson with León conducting, it has received over 22 performances in Germany, Switzerland, France and Mexico. The aria "Oh Yemanja" from Scourge was recorded by Dawn Upshaw on her Nonesuch CD The World So Wide.

León's composition Horizons, written for the NDR Symphony Orchestra of Hamburg, premiered at the July 1999 Hammoniale Festival, with Peter Ruzicka conducting. In August 2000, Horizons had its U.S. premiere at the Tanglewood Music Festival, with Stefan Asbury conducting. León conducted the work with the Orchestre Symphonique de Nancy (France) in March 2002.

Drummin', a full-length cross-cultural work for indigenous percussionists and orchestra, was commissioned and premiered in 1997 by Miami Light Project and the New World Symphony Orchestra. It opened the 1999 Hammoniale Festival in Hamburg.

León's recorded works include Batá, by the Foundation Philharmonic Orchestra, conducted by David Snell and produced by Sir George Martin; Indígena, a collection of León’s chamber music; Carabalí (and already Batá) on the Louisville Orchestra’s First Edition Records; Rituál, for solo piano, and her arrangement of Moises Simons' song "El Manisero" for Chanticleer.

Tania León used award-winning Cuban-American poet Carlos Pintado’s poems to create Rimas Tropicales with a World premiere by in June, 2011 by one of the world’s most respected vocal ensembles: the 5 times Grammy Award-winning group the San Francisco Girls Chorus.

In 1998 León was awarded the New York Governor’s Lifetime Achievement Award. She has received honorary doctorates from Colgate University and Oberlin College and awards from the American Academy of Arts and Letters, the National Endowment for the Arts, Chamber Music America, NYSCA, the Lila Wallace/Reader's Digest Fund, ASCAP, the Koussevitzky Music Foundation, and Meet the Composer, among others. In 1998, she held the Fromm Residency at the American Academy in Rome.

In 2000 she was named the Tow Distinguished Professor at the Conservatory of Music at Brooklyn College, where she has taught since 1985. Brooklyn College is one of the senior colleges of the City University of New York (CUNY), where she is also on the faculty of the CUNY Graduate Center, in Manhattan.

León has been the subject of profiles on ABC, CBS, CNN, PBS, Univision and independent films.

In 2010, her work was performed in Cuba for the first time at the second annual Leo Brouwer Festival of Chamber Music. 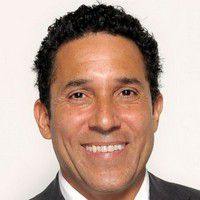 Cuban and spanish painter and diplomat