Susan Cummings (born Gerda Susanne Tafel; July 10, 1930 – December 3, 2016) was a German-American actress active from the 1940s to 1960s, who started as a teenager in the earliest days of commercial television and appeared in several television shows, feature films and on Broadway. Her Tafel birth surname was sometimes printed as Ta Fel.

Born Gerda Susanne Tafel in Bavaria, Germany she immigrated to the United States at age 7½ on March 12, 1938 shortly before the outbreak of World War II. The daughter of Eugen and Mina Tafel, she grew up in Newark, New Jersey, where her father ran a bakery.

Cummings (billed as Suzanne Tafel) was a teenager when she was a regular on the American television variety series At Home, which aired on pioneering New York City television station WCBW (now WCBS-TV) from 1944 to 1945, in the earliest years of commercial television. She first appeared in Broadway theatre in 1945, portraying Susan Peters in Carousel.

During the 1958–59 season, Cummings portrayed Georgia, proprietress of the Golden Nugget Saloon, in the syndicated Western television series Union Pacific.

She made two guest appearances on Perry Mason — one as Lois Fenton in the title role in the 1957 episode, "The Case of the Fan Dancer's Horse," and as Margaret Swaine in the 1959 episode, "The Case of the Lame Canary." She appeared as Patty in the iconic 1962 episode of The Twilight Zone, "To Serve Man". Her final line in that episode was the climactic "It's a cookbook!."'

In the late 1940s, Cummings was married to rodeo performer Wayne Dunafon. She married actor Keith Larsen on December 28, 1953, in Ensenada, Mexico she was also married to Charles T. Pawley and Robert E. Strasser.

The contents of this page are sourced from Wikipedia article on 21 Jul 2020. The contents are available under the CC BY-SA 4.0 license.
View Susan Cummings 's image gallery
Image Gallery 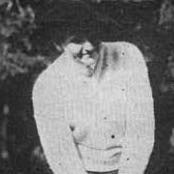 US tennis player and golfer