Süleyman Aktaş is a Turkish serial killer. Nicknamed "The Nailing Killer", he is responsible for five murders. Süleyman Aktaş was employed as a worker at the Turkish Electricity Company in Denizli, Turkey. He was severely injured by high voltage during works at a 31.5 kV electric power distribution line. After this accident, he killed police superintendent Nuri Keskin in Antalya in 1986. He was arrested, and was placed in Manisa Psychiatric Hospital after the court ruled his mental disorder. Aktaş stayed four and a half years in the hospital before his release. He returned to his hometown of Çambaşı village in Bozkurt, Denizli. In 1994, Süleyman Aktaş killed four elderly neighbors by strangling three years after he came back to his hometown. He nailed the couples Ayşe (65) and İsmail Güneş (66), and Rukiye (77) and Ramazan Kocatepe (78) in the eyes and heads. In his testimony after his arrest, he told that "He can not stand nails. He wants to nail people in the head." Aktaş was nicknamed "The Nailing Killer". He was hospitalized as diagnosed with paranoid schizophrenia. He escaped from the hospital, but was apprehended in the coach terminal. In 2007, Aktaş was seen publicly for the first time after twelve years in a rehabiliation show program of the hospital. At noon of May 28, 2008, he assaulted his roommate, the child killer Ömer Yılmaz, and wounded him by hitting him in the head with a rock in the exercise yard of the hospital, where he had been kept in a special department for 13 years. Yılmaz underwent a head surgery in a nearby state hospital, and survived the attack. 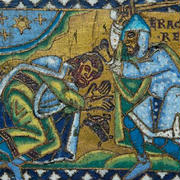