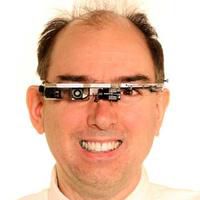 William Stephen George Mann (born 1962) is a Canadian engineer, professor, and inventor known for his work in augmented reality, computational photography, particularly wearable computing, and high dynamic range imaging. He also founded InteraXon, makers of the Muse and Muse2 brain-sensing headband, and is also a founding member of the IEEE Council on Extended Intelligence (CXI). Mann was born in Canada, and currently lives in Stanford/Palo Alto, California, with his wife and two children.

Mann holds a PhD in Media Arts and Sciences (1997) from the Massachusetts Institute of Technology and a B.Sc., B.Eng. and M.Eng. from McMaster University in 1987, 1989 and 1992, respectively. He was also inducted into the McMaster University Alumni Hall of Fame, Alumni Gallery 2004, in recognition of his career as an inventor and teacher. While at MIT, in then Director Nicholas Negroponte's words, "Steve Mann … brought the seed" that founded the Wearable Computing group in the Media Lab and "Steve Mann is the perfect example of someone … who persisted in his vision and ended up founding a new discipline." In 2004 he was named the recipient of the 2004 Leonardo Award for Excellence for his article "Existential Technology," published in Leonardo 36:1.

Many of Mann's inventions pertain to the field of computational photography.

Mann also works in the fields of computer-mediated reality. He is a strong advocate of privacy rights, for which work he was an award recipient of the Chalmers Foundation in the fine arts. His work also extends to the area of sousveillance (a term he coined for "inverse surveillance"). Mann and one of his PhD students, James Fung, together with some of his other students, have been building a cyborg community around the cyborg-logging concept.

His CyborGLOGS ('glogs), such as the spontaneous reporting of news as everyday experience, were an early predecessor of 'blogs and the concept of blogging, and earlier than that, his pre-internet-era live streaming of personal documentary and cyborg communities defined cyborg-logging as a new form of social networking.

Mann is presently collaborating with a number of researchers including Ian Kerr, Canada Research Chair in Ethics, Law & Technology, University of Ottawa, who teaches a course on "Cyborg Law" that uses Mann's book. Mann, together with Kerr and others, are doing a SSHRC-funded project to study the Ethics, Law & Technology of anonymity, authentication, surveillance, and sousveillance, in addition to issues related to cyborg-law. The anonequity project is ongoing, and collaborator Kerr has also researched and lectured widely on implantable technologies.

Mann has been referred to as the "father of wearable computing", having created the first general-purpose wearable computer, in contrast to previous wearable devices that perform one specific function such as time-keeping (e.g. wristwatch); calculations (e.g. wearable abacus); or Edward O. Thorp and Claude Shannon's wearable computers, which were timing devices concealed in shoes or cigarette packs and designed for cheating at a game of roulette.

Mann has also been described as "the world's first cyborg" in Canadian popular press such as NOW, The Globe and Mail, National Post, and Toronto Life, but has himself rejected the term "cyborg" as being too vague.

Mann is author of more than 200 publications, including a textbook on electric eyeglasses and a popular culture book on day-to-day cyborg living. Selected works:

The contents of this page are sourced from Wikipedia article on 08 Mar 2020. The contents are available under the CC BY-SA 4.0 license.
View Steve Mann 's image gallery
Image Gallery