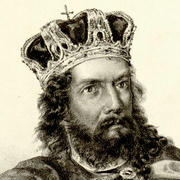 Stefan the First-Crowned King of Serbia

Stefan Nemanjić (Serbian Cyrillic: Стефан Немањић, [stêfaːn němaɲitɕ]) or Stefan the First-Crowned (Serbian: Стефан Првовенчани / Stefan Prvovenčani, [stêfaːn prʋoʋěntʃaːniː]; around 1165 – 24 September 1228) was Grand Prince of Serbia from 1196, and the King of Serbia from 1217 until his death in 1228. He was the first Rascian king, and through his promotion of the Serbian Grand Principality into a kingdom and helping his brother Saint Sava in establishing the Serbian Church, he is regarded one of the most important of the Nemanjić dynasty.

Stefan Nemanjić was the second-eldest son of Grand Prince Stefan Nemanja and Anastasija. His older brother and heir apparent, Vukan, ruled over Zeta and the neighbouring provinces (the highest appanage) while his younger brother Rastko (later known as Saint Sava) ruled over Hum.

The Byzantines attacked Serbia in 1191, raiding the banks of South Morava. Nemanja had a tactical advantage, and began to raid the Byzantine armies. Isaac II Angelos summoned a peace treaty, and the marriage of Nemanja's son Stefan to Eudokia Angelina, the niece of Isaac II, was confirmed. Stefan Nemanjić received the title of sebastokrator.

In an inscription dated 1195 in the church of St. Luke in Kotor, Vukan is titled as King of Duklja, Dalmatia, Travunia, Toplica and Hvosno.

Although Vukan was Nemanja's eldest son, Nemanja preferred to see Stefan II on the Serbian throne mostly because Stefan was married to Byzantine princess Eudokia. It seems that Vukan reacted to this change in succession by declaring himself "King of Duklja". Although he assumed a "sovereign" royal title, Vukan remained under his father's authority. On 25 March 1196, Stefan Nemanja summoned a Council in Ras, where he officially abdicated in favour of his second son, Stefan, to whom he bequeathed all his earthly possessions. This decision was not in accordance with the traditional right of primogeniture, according to which Vukan would have inherited the throne, and it was not accepted lightly by Vukan. Nemanja took monastic vows in the Church of Saints Peter and Paul and adopted the monastic name of Simeon. Simeon subsequently retired to his Studenica monastery and Anastasia retired to the Monastery of the Mother of Christ in Kuršumlija. After numerous pleas by Sava (originally Rastko), Simeon went to Mount Athos and joined Sava in 1197 in the Vatopedi monastery. In 1199, the two together rebuilt the ruined Eastern Orthodox Monastery of Hilandar given to the Serbian people by the Byzantine Emperor, which became the heart of Serbian spiritual culture. Simeon died on 13 February 1199.

While Nemanja was alive Vukan did not oppose Stefan's rule, but as soon as Nemanja died, he started to plot against him in order to become Grand Prince. He found aid in Hungarian king Emeric (1196–1204), who at the time was fighting against the Second Bulgarian Empire and wanted assistance. With the help of Hungarian troops, in 1202 Vukan managed to overthrow Stefan, who fled into Bulgaria. Vukan was left to rule Serbia. In an inscription dating to 1202–1203, Vukan is titled as "Grand Župan Vukan, Ruler of all Serbian land, Zeta, maritime towns and land of Nišava".

In return for Hungarian help, Vukan became a Hungarian vassal and promised that he would convert to Catholicism if the Pope would give him the title of King. However, as a Hungarian vassal, Vukan soon got involved in the conflict with Bulgaria. In 1203 the Bulgarian army attacked Vukan, annexing Niš. In the chaos that followed, and using Vukan's sympathies for Catholicism against him, Stefan managed to return to Serbia and overthrow Vukan in 1204, becoming ruler again. Vukan was pushed into his holdings of Zeta.

In the meantime, Bishop Sava (the youngest brother) had success on Mount Athos, founding the cradle of Serbian Christianity. Sava returned to Serbia in the winter of 1205–06 or 1206–07, and intervened and reconciled his two brothers, taking the remains of his father with him, which he relocated to the Studenica monastery. Stefan II asked him to remain in Serbia with his clergy, which he did, starting a widespread pastoral and educational duty to the people of Serbia. He and Sava founded several churches and monasteries, among them the Žiča monastery.

After the death of Kaloyan, there was a succession war in Bulgaria. Tsar Boril, the most ambitious of the nobles, took the throne and exiled Alexius Slav, Ivan Asen II and Strez (of the Asen family). Strez, the first cousin or brother of Boril, took refuge in Serbia, and was warmly welcomed at the court of Stefan II. Even though Boril requested the extradition of Strez to Bulgaria with gifts and bribes, Stefan II refused. Kaloyan had conquered Belgrade, Braničevo, Niš and Prizren, all of which were claimed by Serbia. At the same time, Boril was unable to take military action against Strez and his Serbian patron, as he had suffered a major defeat at the hands of the Latins at Plovdiv. Stefan went as far as to become a blood brother with Strez, in order to assure him of his continued favor.

Andrija Mirosavljević was entitled to the governance of Hum, as the heir of Miroslav of Hum, the uncle of Stefan II, but the Hum nobles chose his brother Petar as Prince of Hum. Petar exiled Andrija and Miroslav's widow (the sister of Ban Kulin of Bosnia), and Andrija fled to Rascia, to the court of Stefan II. In the meantime, Petar fought successfully with neighbouring Bosnia and Croatia. Stefan sided with Andrija and went to war and secured Hum and Popovo field for Andrija sometime after his accession. Petar was defeated and crossed the Neretva, continuing to rule the west and north of the Neretva, which had in 1203 been briefly occupied by Andrew II of Hungary. Stefan gave the titular and supreme rule of Hum to his son Radoslav, while Andrija held the district of Popovo with the coastal lands of Hum, including Ston. By agreement, when Radoslav died, the lands were bound to Andrija.

Đorđe of Zeta, in order to secure his lands from Stefan, accepted Venetian suzerainty, possibly in 1208. Đorđe may have done this due to tensions between the two, although this must not be the case. Venice, after the Fourth Crusade, tried to exert control of the Dalmatian ports, and managed in 1205 to submit Ragusa – Đorđe submitted to prevent that Venice claimed his ports of southern Dalmatia.

Đorđe promised Venice military aid in case of a revolt by another theoretical Venetian vassal, Dimitri, an Albanian Lord of Kruja. This was likely related to the Rascia-Zeta conflict. Stefan II married off his daughter, Komnena, to Dimitri in 1208. The marriage resulted in close ties and an alliance between Stefan and Dimitri amidst these conflicts. Kruja is conquered by Epirote Despot Michael I Komnenos Doukas, and Dimitri is not heard of in any surviving sources. After Dimitri's death, the lands are left to Komnena, who soon married Greek-Albanian Gregorios Kamonas, who took power of Kruja, strengthening relations with Serbia, which had after a Serbian assault on Scutari been weakened. Đorđe disappears from sources, and Stefan II controls Zeta by 1216, probably through military action. Stefan either put Zeta under his personal rule, or assigned it to his son Stefan Radoslav. Zeta would from now on have no special status, and would be given to the heir apparent.

Despot Michael I of Epirus conquered Skadar, and tried to press beyond, but was stopped by the Serbs and his murder by one of his servants in 1214 or 1215. He was succeeded by his half-brother Theodore Komnenos Doukas. Theodore took on a policy of aggressive expansion, and allied himself with Stefan II. Stefan Radoslav married Anna Doukaina Angelina, the daughter of Theodore.

Having long wanted to call himself king, Stefan set about procuring a royal crown from the papacy. It is not clear what Stefan promised in regard to the status of the Catholic Church, which had numerous adherents in the western and coastal parts of his realm, but a papal legate finally arrived in 1217 and crowned Stefan. The advance of the Catholic Church in Serbia did not last long but angered Serbian clergy. Many opposed Stefan's coronation, with Sava protesting by leaving Serbia and returning to Mount Athos. Later Serbian churchmen were also bothered by Stefan's relations with the papacy; while Stefan and Sava's contemporary Domentian wrote that the coronation was performed by a papal legate, a century later Theodosius the Hilandarian claimed that Stefan was crowned by Sava. The contradiction led some Serbian historians to conclude that Stefan underwent two coronations, first by the legate and in 1219 by Sava, but modern scholars tend to agree that only the former took place.

Stefan was married, around 1186, to Eudokia Angelina, the youngest daughter of Alexius Angelus and Euphrosyne Doukaina Kamaterina. Eudokia was the niece of the current Byzantine Emperor Isaac II Angelus. Isaac II arranged the marriage. According to the Greek historian Nicetas Choniates, Stefan and Eudocia quarreled and separated, accusing one another of adultery, after June 1198. They had three sons and two daughters:

Stefan remarried in 1207/1208, his second wife was Anna Dandolo, granddaughter of Venetian doge Enrico Dandolo. They had one son and one daughter:

He built many fortresses including Maglič. At the end of his life, Stefan took the monastic vow under the name Symeon and died soon after. He was canonized as his father was.

According to the legend there was a guest house on the road between Budva and Petrovac and a column in front of it with a wine vessel for thirsty passengers. According to this legend Stefan drank from this wine vessel during his visit to his cousin, Venetian Doge Dandolo. Later, in 1223 or 1226, he allegedly built the Church of the Assumption of Mary (Serbian: Црква Успења Пресвете Богородице), thereby founding the Reževići Monastery.

The contents of this page are sourced from Wikipedia article on 07 Mar 2020. The contents are available under the CC BY-SA 4.0 license.
View Stefan the First-Crowned 's image gallery
Image Gallery 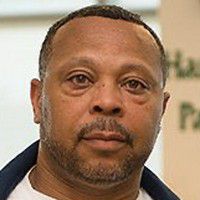 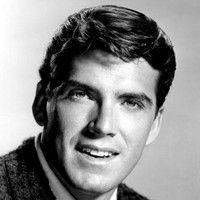 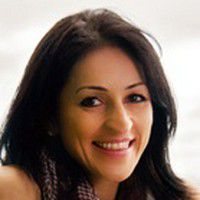 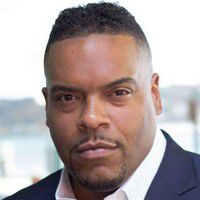 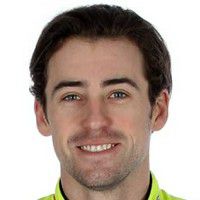 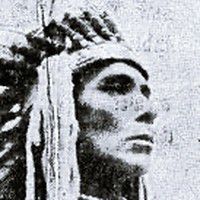 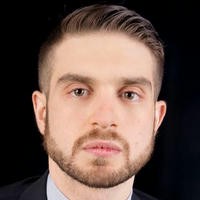