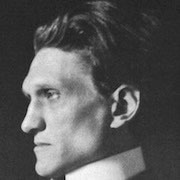 George was born in 1868 in Büdesheim (now part of Bitburg-Prüm) in the Grand Duchy of Hesse (now part of Rhineland-Palatinate). His father, also Stefan George, was an inn keeper and wine merchant and his mother Eva (née Schmitt) was a homemaker. His schooling was concluded successfully during 1888, after which he spent time in London and in Paris, where he was among the writers and artists who attended the Tuesday soirées held by the poet Stéphane Mallarmé. His early travels also included Vienna, where during 1891 he met, for the first time, Hugo von Hofmannsthal.

George began to publish poetry during the 1890s, while in his twenties. He initiated and edited a literary magazine named Blätter für die Kunst [de], and was the main person of the literary and academic group known as the George-Kreis ("George-Circle"), which included some of the major, young writers of the time such as Friedrich Gundolf and Ludwig Klages. In addition to sharing cultural interests, the group promoted mystical and political themes. George knew and befriended the "Bohemian Countess" of Schwabing, Fanny zu Reventlow, who sometimes satirised the group for its melodramatic actions and opinions. George and his writings were identified with the Conservative Revolutionary philosophy. He was a homosexual, yet exhorted his young friends to have a celibate life like his own.

During 1914, at the start of the World War, George foretold a sad end for Germany, and between then and 1916 wrote the pessimistic poem "Der Krieg" ("The War"). The outcome of the war was the realization of his worst fears. In the 1920s, George despised the culture of Germany, particularly its bourgeois mentality and archaic church rites. He wished to create a new, noble German culture, and offered "form", regarded as a mental discipline and a guide to relationships with others, as an ideal while Germany was in a period of social, political, spiritual and artistic decadence. George's poetry was discovered by the small but ascendant Nationalsozialistische Deutsche Arbeiterpartei (NSDAP), a precursor to Nazism, which had its roots in Bavaria. George's concepts of "the thousand year Reich" and "fire of the blood" were adopted by the NSDAP and incorporated into the party's propaganda. George would come to detest their racial theories, especially the notion of the “Nordic superman”. After the assumption of power by the Nazis in 1933, Joseph Goebbels offered him the presidency of a new academy for the arts, which he refused. He also stayed away from celebrations prepared for his 65th birthday in July 1933. Instead he travelled to Switzerland, where he died near Locarno on 4 December 1933. After his death, his body was interred before a delegation from the German government could attend the ceremony.

George's poetry is characterized by an aristocratic ethos; his verse is formal in style, lyrical in tone, and often arcane in language, being influenced by Greek classical forms, in revolt against the realist trend of German literature at the time. Believing that the purpose of poetry was an alternate to reality‍—‌he was a strong advocate of art for art's sake‍—‌George's products had many similarities with the French Symbolist style and he was in communication with many of its representatives, including Stéphane Mallarmé and Paul Verlaine.

George was an important intermediary between the 19th century and German modernism, even though he was a harsh critic of the then modern era. He experimented with various poetic metres, punctuation, obscure allusions and typography. George's "evident homosexuality" is represented by works such as Algabal and the love poetry he devoted to a gifted adolescent of his acquaintance named Maximilian Kronberger, whom he called "Maximin", and whom he believed to be a manifestation of the divine. The relevance of George's sexuality to his poetic work has been discussed by contemporary critics, such as Thomas Karlauf and Marita Keilson-Lauritz.

Algabal is one of George's best remembered collections of poetry, if also one of his strangest; the title is a reference to the effete Roman emperor Elagabalus. George was also an important translator; he translated Dante, Shakespeare and Baudelaire into German.

George was awarded the Goethe Prize during 1927.

George's last complete book of poems, Das neue Reich ("The New Realm"), was published in 1928. It was banned in Occupied Germany after World War II, as the title sounded more than a little tainted by Nazism. But George had dedicated the work, which includes the lyric Geheimes Deutschland ("Secret Germany") written in 1922, to Berthold Schenk Graf von Stauffenberg, who, with his brother Claus, took a leading role in the 20 July plot to assassinate Adolf Hitler and overthrow the Nazi Party. Both brothers, who were executed after the plot failed, had considered themselves to be acting on the teachings of the George-Circle by trying to kill Hitler. The book describes a new form of society ruled by a hierarchical spiritual aristocracy. George rejected all attempts to use it for mundane political purposes, including those of National Socialism.

George apparently thought of himself as the messiah of a new kingdom that would be governed by intellectual and artistic elites, bonded by their faithfulness to a commander. In his memoirs, Albert Speer claims to have seen George during the early 1920s and that his elder brother, Hermann, was an acquaintance of his: George "radiated dignity and pride and a kind of priestliness... there was something magnetic about him."

His poetry emphasized self-sacrifice, heroism, and power, which won him the approval of the National Socialists. But although many Nazis claimed George as an influence, George himself remained aloof from such associations and did not get involved with politics. Soon after the Nazi seizure of power, George left Germany for Switzerland where he died the same year.

Some of the members of the 20 July plot against Hitler were drawn from among his devotees, notably the Stauffenberg brothers who were introduced to George by the poet and classical scholar Albrecht von Blumenthal. Although some members of the George circle were explicitly anti-semitic (for example, Klages), it also included Jewish authors such as Gundolf, the historian Ernst Kantorowicz, and the Zionist Karl Wolfskehl. George was fond of his Jewish disciples, but he expressed reservations about their ever becoming a majority in the group.

Perhaps the most eminent poet who collaborated with George, but who refused membership in the group, was Hugo von Hofmannsthal, one of Austria's outstanding literary modernists. Later in life, Hofmannsthal wrote that no one had influenced him more than George. Those closest to the "Master," as George had his disciples call him, included several members of the 20 July plot to assassinate Hitler, among them Claus von Stauffenberg himself. Stauffenberg frequently quoted George's poem Der Widerchrist (The Anti-Christ) to his fellow members of the 20 July plot.

George's poetry was a major influence on the music of the Second Viennese School of composers, particularly during their Expressionist period. Arnold Schoenberg set George's poetry in such works as "Ich darf nicht dankend", Op. 14/1 (1907), String Quartet No. 2, Op. 10 (1908), and The Book of the Hanging Gardens, Op. 15 (1909), while his student Anton Webern made use of George's verse for his early choral work Entflieht auf leichten Kähnen, Op. 2, as well as in two sets of songs, Opp. 3 and 4 of 1909, and in several posthumously published vocal works from the same period.

In Rainer Werner Fassbinder's 1976 movie Satansbraten the protagonist Walter Kranz attempts to model his life on that of George.

The contents of this page are sourced from Wikipedia article on 08 Mar 2020. The contents are available under the CC BY-SA 4.0 license.
View Stefan George 's image gallery
Image Gallery