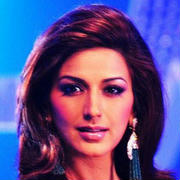 Sonali Bendre (born 1 January 1975) is an Indian film actress who has primarily worked in Hindi films and has won a Filmfare Award.

Bendre was born in Mumbai in a Maharashtrian family. She studied at Ramnarain Ruia College, Mumbai. She has a brother who lives in Mumbai. Her father was a civil servant. She studied in Kendriya Vidyalaya, Bangalore.

Bendre was a model before entering the Star Dust Talent Search. She was then cast in a movie called Ram, produced by Sohail Khan. However, this movie was never made. Her first major role was in Aag (1994) at the age of 19. For this, she won the Filmfare Award for Lux New Face of the Year and Star Screen Awards for Most Promising Newcomer. In 1994, she also appeared in Naaraaz, for which she was awarded Filmfare's Sensational Debut award. In 1995, she appeared in Bombay in the song Humma Humma.

In 1996, she starred in Rakshak, English Babu Desi Mem, Diljale, Apne Dam Par and Sapoot. In the same year, she welcomed Michael Jackson on his arrival in India in a traditional Marathi sari and applied tilak on his forehead. In 1997 and 1998, Bendre starred in Bhai, Tarazu, Qahar, Keemat, Humse Badhkar Kaun, Major Saab, Angaaray and Zakhm. She was seen opposite Shah Rukh Khan in Duplicate. At the beginning of 1999, Bendre starred in two Tamil Movies: Kadhalar Dhinam and Kannodu Kanbathellam. Bendre starred in Hum Saath-Saath Hain: We Stand United, Dahek and Sarfarosh as well.

In 2001, she made her Telugu debut with Mahesh Babu. For this film, she was nominated for a Filmfare Award for Best Actress in Telugu. Then, she was seen in Love Ke Liye Kuch Bhi Karega. She featured in a song, Mujhe Saajan Ke Ghar Jaana Hai, in Lajja. Bendre later acted in Tera Mera Saath Rahen.

In 2002, Bendre starred in 3 Telugu Movies: Indra, Khadgam and Manmadhudu. In 2003, Bendre made her Marathi debut with Anahat, for which she got nominated for Star Screen Awards Best Actress in Marathi. Consecutively, Bendre starred in Pyaar Kiya Nahin Jaatha (Hindi), Palnati Brahmanayudu (Telugu) and Chori Chori (Hindi). She made a special appearance in Kal Ho Naa Ho.

2004 was the last active year of her career. Bendre starred in Shankar Dada MBBS and made a special appearance in Aga Bai Arrecha!. In addition to her acting, she was also recognised as a dancer through films such as Gaddar, Sapoot, Bombay, Lajja and Major Saab. She took a break after this. In 2007, Bendre starred in a play called Aap Ki Soniya.

In 2012, Bendre opted out of India's Got Talent in order to facilitate her comeback movie Once Upon a Time in Mumbai Dobaara!. Her part was described by the director Milan Luthria: "Sonali's character is called Mumtaz. The name spells enigma and is very crucial to the plot of the film. The character doesn't fit into the usual mould of a mother or a sister or bhabhi but has an identity of its own. That is what makes it special. And that's why Sonali agreed to be a part of the film."

Bendre has been considered a style icon. In 2012, she was the brand ambassador of Oriflame India. She has authored a book, The Modern Gurukul: My Experiments with Parenting. She has run the Sonali Book Club since 2017.

The state government of Rajasthan filed an appeal against the acquittal of Bendre and other Bollywood actors charged with hunting blackbucks in 1998 at Kankani village near Jodhpur.

On 4 July 2018 she revealed on Twitter that she has been diagnosed with an aggressive form of cancer and was undergoing treatment in a New York City hospital. Ram Kadam, a politician, received criticism for posting a false tweet about Bendre's death in September 2018.

The contents of this page are sourced from Wikipedia article on 07 Mar 2020. The contents are available under the CC BY-SA 4.0 license.
View Sonali Bendre 's image gallery
Image Gallery