Sobekneferu (sometimes written "Neferusobek") was an Egyptian woman reigning as pharaoh after the death of her brother Amenemhat IV. She was the last ruler of the 12th Dynasty and governed Egypt for almost 4 years from 1806 to 1802 BC. Her name means "the beauty of Sobek."

She was the daughter of Pharaoh Amenemhat III. Manetho states she also was the sister of Amenemhat IV, but this claim is unproven. Sobekneferu had an older sister named Nefruptah who may have been the intended heir. Neferuptah's name was enclosed in a cartouche and she had her own pyramid at Hawara. Neferuptah died at an early age however.

Sobekneferu was the first known female Pharaoh for which there is confirmed proof, although Nitocris may have ruled in the Sixth Dynasty, and there are five other women who are believed to have ruled as early as the First Dynasty.

Amenemhat IV most likely died without a male heir; consequently, Amenemhat III's daughter Sobekneferu assumed the throne. According to the Turin Canon, she ruled for 3 years, 10 months, and 24 days in the late 19th century BC.

She died without heirs and the end of her reign concluded Egypt's brilliant Twelfth Dynasty and the Golden Age of the Middle Kingdom as it inaugurated the much weaker Thirteenth Dynasty. Drawing by Flinders Petrie of the cylinder seal of Sobekneferu in the British Museum.

Few monuments have been discovered for her, although many of her (headless) statues have been preserved including the base of a representation of a king's royal daughter that was discovered in Gezer and bears her name. One statue with head is known. A bust in the Egyptian Museum of Berlin (Inv. no. 14476), lost in World War II, could be identified as belonging to her. The sculpture is today only known from photographic images and plaster casts. It came in 1899 to the museum. The head fits on top of the lower part of a royal statue discovered at Semna. The latter can be identified for sure as royal as the royal symbol unification of the two countries appears on the side of the throne. It is known that she made additions to the funerary complex of Amenemhat III at Hawara (called a labyrinth by Herodotus) and also built structures at Herakleopolis Magna.

A fine cylinder seal bearing her name and royal titulary is today located in the British Museum. A Nile graffito, at the Nubian fortress of Kumma records the Nile inundation height of 1.83 meters in Year 3 of her reign. Another inscription discovered in the Eastern Desert records year 4, second month of the peret season. Her monumental works consistently associate her with Amenemhat III rather than Amenemhat IV, supporting the theory that she was Amenemhat III's royal daughter and was perhaps only a stepsister of Amenemhat IV. The Danish Egyptologist, Kim Ryholt, notes that the contemporary sources from her reign show that Sobekneferu never adopted the title of "Queen" or King's sister"--only 'King's Daughter'--which supports this hypothesis.

Her tomb has not been identified positively, although she may have been interred in a pyramid complex in Mazghuna that lacks inscriptions, immediately north of a similar complex ascribed to Amenemhat IV. A place called Sekhem-Neferu is mentioned in a papyrus found at Harageh. This might be the name of her pyramid.

Soldier and administrator of Turco-Egyptian of Circassian ancestry 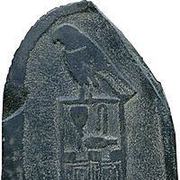