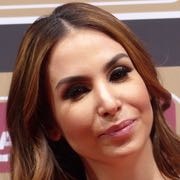 Şahin-Radlinger posed nude for the German edition of Playboy magazine in May 2011, and became the first Turkish woman to appear on the cover of the magazine. The move upset some conservative members of her family. Muslim Indian-American writer Asra Nomani wrote of the relation of the Islamic term awrah to Şahin, and to other Muslim women including Nomani herself, concluding with an expression of hope in "finding a middle ground" between traditional and evolving mores.

In the interview published in the magazine, Şahin-Radlinger described her act as one of liberation and described it as a revolution akin to Che Guevara:

"My upbringing was conservative, I was always told, you must not go out, you must not make yourself look so attractive, you mustn’t have male friends. I have always abided by what men say. As a result I developed an extreme desire for freedom. I feel like Che Guevara. I have to do everything I want, otherwise I feel like I may as well be dead."

However, Florian Boitin, the editor in chief of German Playboy, claims Sıla Şahin-Radlinger is not a Muslim, saying, "Sila isn't Muslim. Her father doesn't belong to any [religion] and her mother is Christian. And the Playboy cover with Sila Sahin is not a religious statement."

Şahin-Radlinger was born in Spandau, Berlin to an actor father and lives in Charlottenburg. She is 1.71 m (5 ft 7 ⁄2 in) tall and speaks four languages: German, Kurdish, Turkish and English.

In June 2016, she married footballer Samuel Radlinger. She and her Husband of Two children. The Boys Elija and Noah Şahin-Radlinger.