Ibrahim Riahi, birth name Abou Ishak Ibrahim Ben Abdelkader Riahi (1766 Testour – August 7, 1850), was a Tunisian ambassador, theologian and saint. A Sunni Muslim scholar, he was also a poet. He was the grandfather of Ali Riahi.

Sidi Brahim frequented from a young age a kouttab in Testour and showed talent for religious sciences and learning the Quran. Upon his arrival in Tunis, around 1782, he studied at the Haouanet Achour madrassah and then at the Bir Lahjar madrassah.

Around 1790, he began teaching at Zitouna University where the future ministers Ibn Abi Dhiaf and Béji Messaoudi as well as the greatest theologians of the time, such as Mohamed Bayram IV and Mahmoud Kabadou, were among his students.

In 1801, he was part of an embassy in Morocco, where he stayed for several months; there he discovered the Sufi tariqa of the Tijaniyya and introduced it to Tunisia on his return. 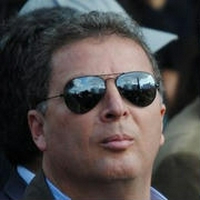