Shweta Tiwari (born 4 October 1980) is an Indian actress who works in Hindi films and television. She is known for her performance as the main lead Prerna Sharma Bajaj in Ekta Kapoor's soap opera Kasautii Zindagii Kay (2001–08) and subsequently featured in several other television series including Parvarrish (2011–13), Begusarai as Bindiya Thakur (2015–16) and Mere Dad Ki Dulhan (2019–20).

Tiwari married actor Raja Chaudhary in 1998 and they have a daughter, born on 8 October 2000. She filed for a divorce in 2007 after nine years of marriage. Tiwari reported she suffered a troubled relationship characterised by Raja's alcoholism and domestic violence. She complained that he used to beat her up daily. He used to turn up on the sets of her shows and misbehave with her.

Tiwari and actor Abhinav Kohli were married on 13 July 2013 after dating for almost three years. On 27 November 2016, Tiwari gave birth to a baby boy. Reports of problems in their marriage first emerged in 2017. In August 2019, Tiwari filed a complaint of domestic violence against Kohli alleging harassment by Kohli towards her and her daughter. Kohli was taken into police custody. Tiwari and Kohli separated in 2019.

Tiwari first appeared on television on Doordarshan in 1999. Her first TV serial was the afternoon soap Kaleerein telecast on DD National, then called DD-1. Then she got her second Doordarshan project Ane Wala Pal, which was telecast in 2000 on the now-defunct network DD-Metro. She later appeared in the TV series Kaahin Kissii Roz, after which she played the lead role of Prerna on Kasautii Zindagi Kay which ran between 2001 and 2008.

In 2010, Tiwari participated in the fourth season of the reality show Bigg Boss. She was declared as the winner of the season on 8 January 2011, becoming the first woman to win the contest in the process. In 2013, she played the role of Sweety Ahluwalia in Parvarrish – Kuchh Khattee Kuchh Meethi. In 2015, she played Bindiya Rani in the &TV show Begusarai.

The contents of this page are sourced from Wikipedia article on 26 Nov 2021. The contents are available under the CC BY-SA 4.0 license.
View Shweta Tiwari 's image gallery
Image Gallery 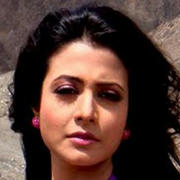