Severin Schwan (born 1967) is the CEO of the Roche group, a Swiss-founded, but now global pharmaceutical company. 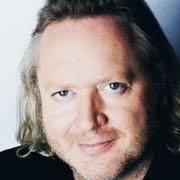