In 1004, he became the Bishop of Albano. He was elected pope after the abdication of Pope John XVIII in 1009, and adopted the name Sergius IV.

The power held by Sergius IV was small and often overshadowed by the Patricius, John Crescentius III, the ruler of the city of Rome at the time. He checked the power of Crescentius, who by strengthening the party in favour of the Germans. Sergius IV acted to relieve famine in the city of Rome, and he exempted several monasteries from episcopal rule.

A papal bull calling for Muslims to be driven from the Holy Land after the Church of the Holy Sepulchre was destroyed in 1009 by the Fatimid caliph al-Hakim bi-Amr Allah has been attributed to him, although its authenticity has long been a matter of debate. Carl Erdmann considered it genuine, but it was rejected at length by Aleksander Gieysztor, who suggested that it was actually invented around the time of the First Crusade in order to help justify that expedition to Jerusalem. Subsequently, Hans Martin Schaller has argued for the document's authenticity.

Sergius died on 12 May 1012 and was buried in the Basilica of St. John Lateran. Although not canonized, Sergius is sometimes venerated as a saint by the Benedictines of which he was a member. There was some suspicion that he was murdered, as he died within a week of Crescentius, considered by many to have been his patron. Sergius was followed in the papacy by Pope Benedict VIII.

The contents of this page are sourced from Wikipedia article on 18 Mar 2020. The contents are available under the CC BY-SA 4.0 license.
View Sergius IV 's image gallery
Image Gallery 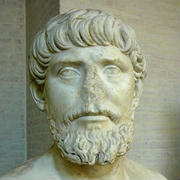