Sergey Vasilyevich Andreyev (Russian: Сергей Васильевич Андреев; born 16 May 1956 in Luhansk) is a Russian football manager and a former Soviet and Russian player.

He earned 26 caps and scored 8 goals for the USSR national football team, and participated in the 1982 FIFA World Cup. He also won a bronze medal in football at the 1980 Summer Olympics, scoring a hat trick against Cuba. 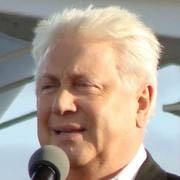